A case study in Bulgaria
Anelia Iantcheva, Ivayla Dincheva, Ilian Badjakov
Posted: 07.02.2022
This article describes the result of a case study of the use of cold-pressed soybean cake for feeding laying hens. Cold-pressed soybean cake is used by one of the three selected egg producers in Bulgaria. The inclusion of soybean cake up to 50% of the soybean protein in the feed of laying hens resulted in improved feeding performance. The soybean cake was produced from cold-pressing of the locally grown soybean cultivar Srebrina with separation of soybean oil. The cake is at least 37% protein. The use of this cake increased the content of free amino acids (AAs) and fatty acids (FAs) of the eggs. We conclude that this type of local production and processing of plant protein can have a positive economic effect in animal husbandry and quality of the final product. It also contributes to the circular agricultural economy. Most farmers and local producers aim to apply circular economy in agriculture. Defatted and untreated soybean cake obtained by cold pressing has been reported as an excellent source of crude protein in animal nutrition. In our case study, we found the important feature of the soybean cake is a higher amount of leucine in eggs. Leucine is a branched chain amino acid. It is synthesised only by plants and acts as a signalling molecule for activation of the gene expression of many developmental genes. 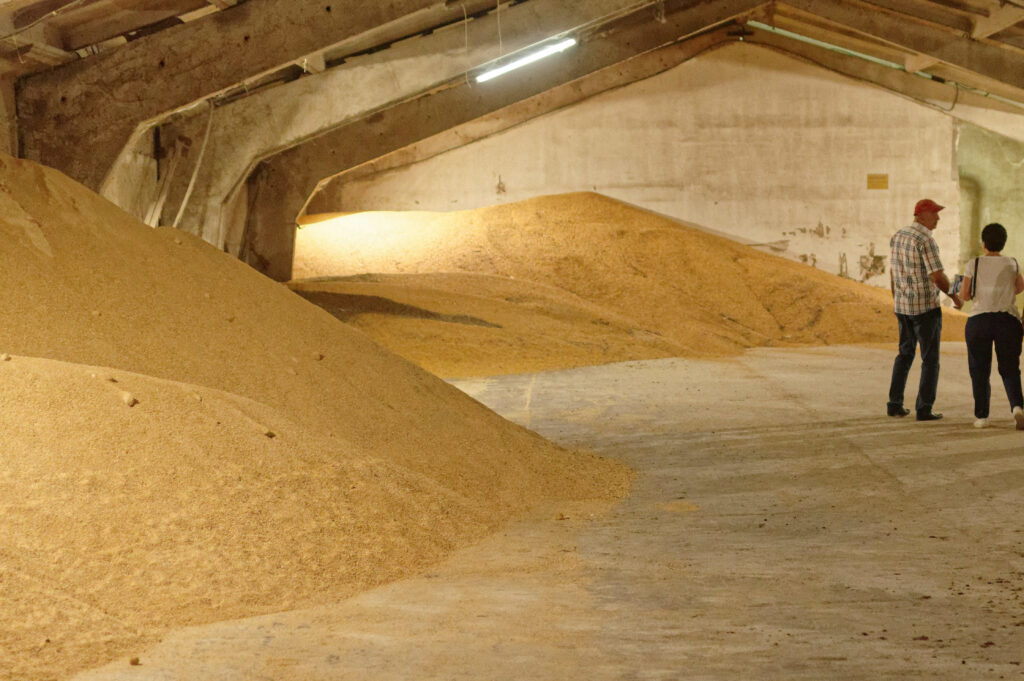 We examined the effect of the feed used by three different egg producers. These egg producers are located in north-west and north-central Bulgaria. All three are specialised egg and poultry producers with their own feed mills. Two used imported soybean meal as the sole high-protein supplement source in the feed. The third producer (Producer 3) used own-grown (Bulgarian cv. Srebrina) cold-pressed soybean cake as the source of 50% of the soy-based protein in the feed, the other 50% provided by imported soybean meal. Feed samples taken from each of the three producers were analysed in a certified laboratory for energy (MJ/kg) and the contents (%) of protein, fat, starch, and total sugars (Figure 1).

Cold pressing of soybean grain is an easy process which does not require very expensive equipment. The inclusion of soybean cake in the animal feed on the other hand could benefit animal health and the quality of the final product. In our case study, we found that feed for laying hens in which 50% of imported soybean meal is replaced by soybean cake produced from locally grown soybean could increase the content of free AAs and FAs in thefinal product and benefit the quality of eggs.

The essential AAs (histidine, isoleucine, leucine, lysine, methionine, phenylalanine, threonine, tryptophan and valine) and FAs (linoleic acid (an omega-6 fatty acid) and alpha-linolenic acid (an omega-3 fatty acid)) cannot be synthesised by humans and animals and must be taken in through the diet for normal development and healthier nutrition.

As part of the European project “Legumes translated” ID 817634, www.legumestranslated.eu, aiming to promote the cultivation and use of leguminous crops in Europe – the Bulgarian Legumes Network /BGLN/ performed this case study.

The information provided is the result of observations, discussions and experimental work of authors who are part of the Bulgarian Legumes network.

Acknowledgement: Legumes Translated has received funding from the European Union's Horizon 2020 research and innnovation programme under grant agreement No. 817634.
Citation: Dincheva, I., Badjakov, I. and Iantcheva, A., 2022. Cold-pressed soybean for poultry. Legume Hub. www.legumehub.eu