Leonardo Amthauer Gallardo, Jens Dauber
Posted: 29.03.2022
Agriculture faces a serious challenge as species diversity in agricultural landscapes declines. Grain legumes are thought to contribute to farmland biodiversity. In a survey of the international literature we established that, with the exception of soybean, there is little information on the impact of grain legumes on floral diversity of agroecosystems. According to a quantitative analysis of available data, soybean reduces weed biomass, density, and seed production when compared to other single crops, but somewhat increased them when the cropping sequence was considered. The floral diversity parameters species richness, Shannon diversity, and evenness were unaffected by soybean cultivation. 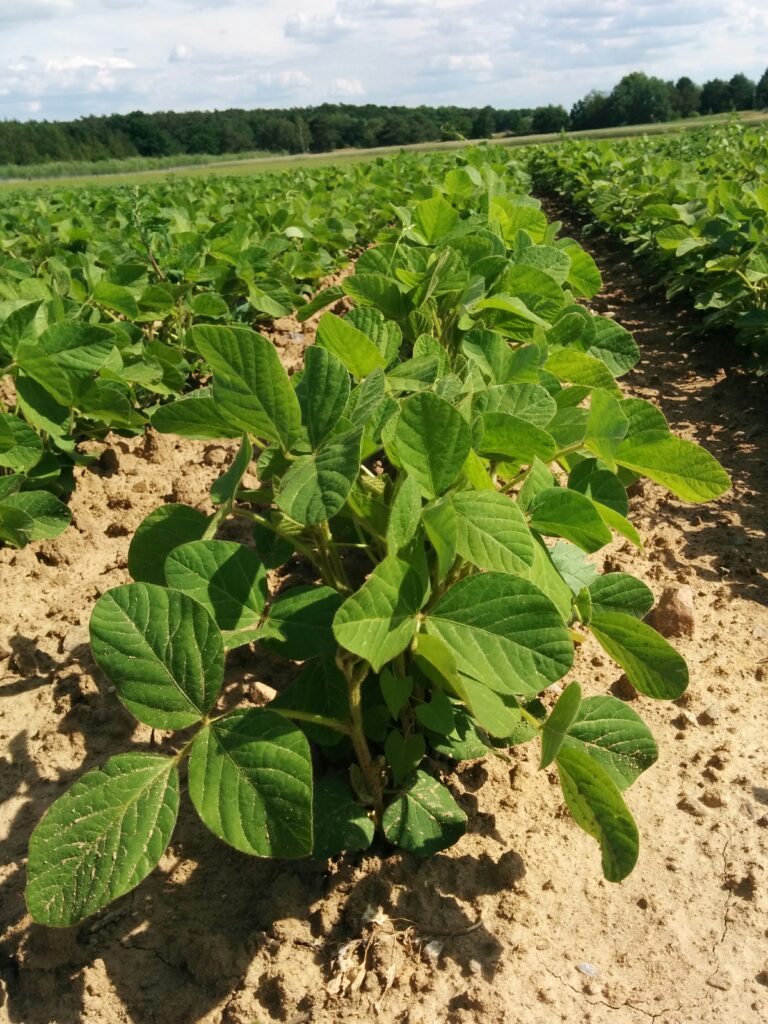 Soybean on the field

Agroecosystems are biodiversity-depleted ecosystems. The expansion of arable land and the intensification of its use has displaced natural habitats and reduced the biodiversity of entire landscapes. Since agriculture dominates land use over most of Europe, increasing on-farm biodiversity is a challenge for policymakers, scientists and land managers. Securing and enhancing the amount of semi-natural habitats, flower strips, intercropping (polyculture), extended crop rotations, the use of perennial crops, organic farming, and the increase in the production of biodiversity-enhancing arable crops are all relevant approaches. The positive impact of perennial forage legume species on agricultural habitats is well documented. Less is known about the effects of grain legumes. The question addressed here is, what can we conclude about the effects of annual grain legumes on farmland floral diversity from the existing scientific evidence. We searched the world-wide academic literature for reports of studies that compared grain legume crops with the crops they replace with respect to the biomass, cover grade, density, evenness, frequency, species richness, hierarchical richness index, seed production, relative abundance and species richness of accompanying flora. It examined the crops grown and crop management as factors that might drive the effects of growing legumes on floral diversity.

Agricultural floral diversity is affected by factors such as site history, soil type and local environment variation, and microbial communities. Furthermore, management practices, such as different planting and harvest dates of the crops, tillage, and plant protection regimes, especially their timing, are very relevant. Although legumes are generally seen as crops that support biodiversity, there is little evidence if annual grain legumes integration into European crop sequences will increase floral biodiversity positively.

It was immediately obvious from the search of the literature that there is a scarcity of peer-reviewed evidence about the effects of introducing grain legumes into cropping systems on floral diversity, especially for grain legumes other than soybean. We found 53 sources for soybean. This was followed by pea (17 sources), lupin and faba bean (each two sources). Therefore we here focused only on soybean and chose 25 sources for further analysis, containing analysable information about the effect of soybean on associated flora. The plant parameters which were studied most were weed density, biomass, species richness, and Shannon diversity. Other parameters, such as seed production, weed cover, evenness and hierarchical index, were only seldom found in the literature (Table 1). The available literature covered both emerged weeds and seedbanks in agroecosystems. Data on emerged weeds show the respective current state of weed communities in a crop whereas the weed seedbank provides information about long-term developments. Therefore both values were treated seperately in our analyses. 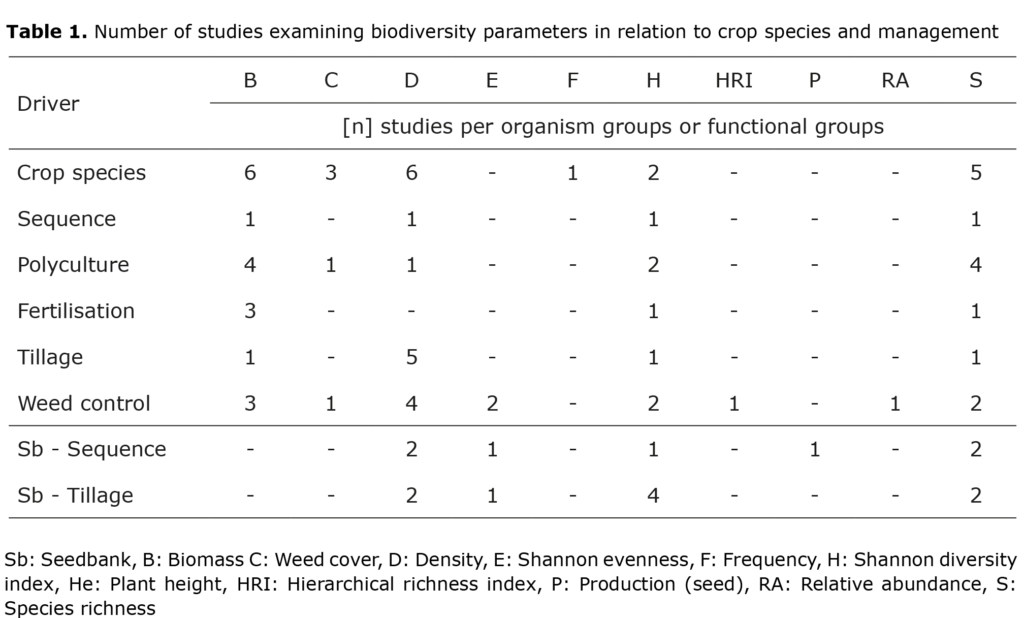 We encountered two issues with the evidence that made further investigation difficult. There were too few publications and the experimental settings were largely inhomogeneous. Still, we extracted the relevant data from the literature to make relative difference comparisons by standardising the results of the various publications (Formula 1). Individual trials with varied location or management within an article, as well as data from different years, were treated as replications to address the lack of repetitions for the quantitative analysis. Annual data consisted primarily of a composite measurement of replicates in parcels at various times during the growing season. Four replications were required as a minimum.

Taking all experiments and data into account, other crops (mostly maize, sorghum, sunflower and wheat) supported more floral diversity of emerged weeds than soybean. The difference amounted on average 150% for weed biomass, 135% for cover grade, 110% for density and 125% for seed production compared to soybean (Figure 1). The difference was smallest for species richness. Only maize had a lower floral diversity than soybean.

All polyculture measures, cover crop use, double-cropping, or intercropping resulted in reduced biomass of emerged weeds. In intercropping systems, the partner crop to soybean seems to play a decisive role in its influence on floral diversity parameters. Overall our global data analysis showed that intercropping soybean with a crop partner increased species richness by 38% compared to single soybean (Figure 3) even though weed biomass is reduced. This dynamic was also given for other studied crops compared to their intercrop. Systems with soybean tended to have increased plant diversity where tillage was reduced. Crop protection measures resulted in more uniform plant communities, while diversity remained almost unaffected.

The evidence about the effect of soybean production on floral diversity is weak. Crop factors such as varying crop emergence times, canopy light interception, variations between autumn and spring-sown crops, and the presence of allelopathic chemicals impact weed diversity in different crop ecosystems. Crop traits and weed management are possible reasons for the low floral diversity in soybean compared to other arable crops. Soybean can successfully suppress accompanying vegetation because of its closed canopy. It reaches full ground cover earlier than corn. Furthermore, weeds are intensively controlled in soybean independent of the weed control system used (herbicide tolerance or conventional). Soybean introduction into crop sequences improved weed seedbank density despite being weak in terms of emerged weed biomass in single crop comparisons. This may be due to the short soybean growing period and the innate difference of both weed parameters. The results presented here offered some insights into the effect of soybean within polyculture systems. Using cover crops in soybean cultivation negatively impacted floral diversity parameters. The high crop plant densities in additive intercropping inhibits weed growth.

Compared with other crops, the evidence indicates that soybean crops have less weed biomass compared with other crops in cropping systems. Diversity oriented parameters such as Shannon diversity, evenness, and species richness remained almost unaffected. Surprisingly, weed seedbank density, contrary to the observations for emerged weeds biomass in crop comparisons, was positively influenced by including soybean in the crop sequence. We conclude that the integration of soybean in European crop sequences generally has a neutral effect on floral diversity. 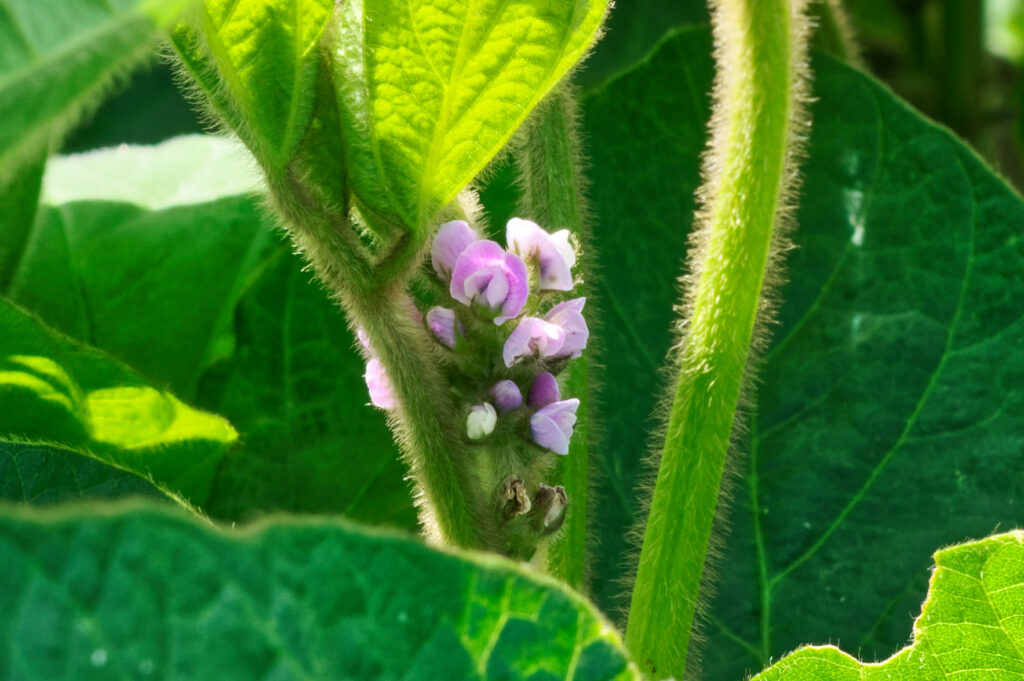 Cover grade: the proportion of the land or soil surface covered by plants, usually given as fraction 0-1, or percentage.

Density: the number of individuals per unit of area or space.

Evenness: how equal the distribution of individuals of species is between samples. This is a structural parameter for comparing different communities.

Frequency: the number of times a species occurs in a defined area in a given time.

Species richness: the number of species per unit area.

Shannon diversity index: an index of diversity based on the number of species and number of individuals per species.