Effects of soybean cropping on arthropods

Leonardo Amthauer Gallardo, Jens Dauber
Posted: 15.03.2022
The decline in the diversity and biomass of arthropods, insects in particular, in agricultural landscapes poses a major challenge to agriculture. There is little evidence about the effect of introducing grain legumes into cropping systems on this group of organisms. In a review of the international literature, we found that, except for soybean, there is almost no information on the impact of grain legumes on arthropod diversity and activity density. A quantitative analysis of the available information on soybean showed that soybean crops have a greater activity density and species richness of arthropods compared to other arable crops such as maize and wheat. Against the background of the critical state of agroecosystem biodiversity, we conclude that the introduction of soybean into cropping systems otherwise dominated by cereals is unlikely to cause a further decline in arthropods with the likelihood of some gains. 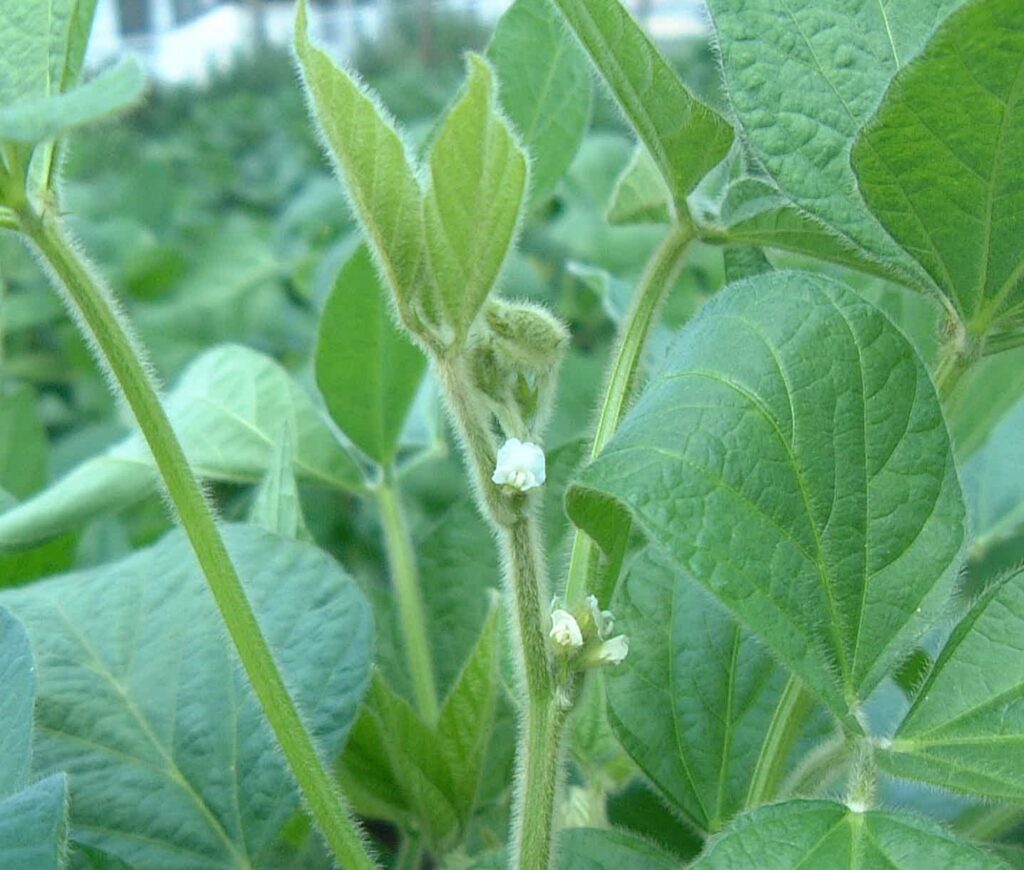 Many agroecosystems are biodiversity-depleted ecosystems. The expansion of arable land and the intensification of its use has displaced natural habitats and reduced the biodiversity of entire landscapes. Since agriculture dominates land use over most of Europe, increasing on-farm biodiversity is a challenge for policymakers, scientists and land managers. Securing and enhancing the amount of semi-natural habitats, flower strips, intercropping (polyculture), extended crop rotations, the use of perennial crops, organic farming, and the increase in the production of biodiversity-enhancing arable crops are all relevant approaches. The positive impact of perennial forage legume species on agricultural habitats is well documented. Less is known about the effects of grain legumes. The question addressed here is what we can conclude about the effects of soybean on farmland biodiversity, arthropods in particular, from the existing scientific evidence. We searched the world-wide academic literature for reports of studies that compared grain legume crops with the crops they replace with respect to the number of individuals of invertebrate taxa (activity density), the number of species (species richness), and the distribution of individuals and species (Shannon diversity and evenness). This assessment covered a range of taxa and functional species groups. It examined the crop species grown and crop management as factors that might drive the effects of growing soybean on biodiversity.

It was immediately obvious from the search of the literature that there is a scarcity of peer-reviewed evidence about the effects on arthropods of introducing grain legumes into cropping systems, especially for grain legumes other than soybean. We found 21 reliable studies on soybean. Most sources originated from North and South America. Of these, 16 compared soybean with other crop species, six focused on cropping sequence, and two examined intercropping of soybean with each wheat and sunflower. Five sources compared the effect of crop management factors such as tillage, fertilisation, and weed control. Only four sources included landscape scale effects. Table 1 provides an overview of the range of studies identified. 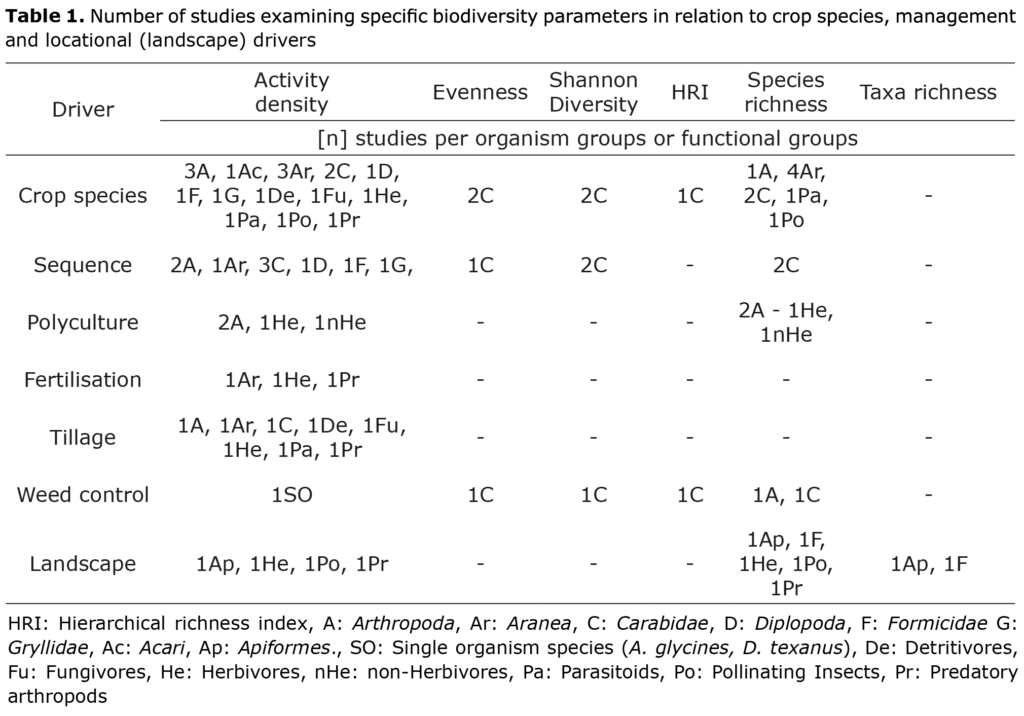 Activity density was the most studied parameter, followed by species richness. Shannon diversity, evenness, and hierarchical richness index were only rarely studied. Overall, and taking all organism groups into account, information on soybean effects on arthropods is fragmented and was studied in combination with a wide range of crop management parameters. Since only about half of the studies indicated an error or variance analysis, a classical metaanalysis could not be conducted. Therefore, our analysis is based on the relative differences between means with the effect’s direction shown by a plus/minus sign, i.e. plus when soybean had a positive effect, minus when soybean had a negative effect (Formula 1).

For example, for the biodiversity parameter species richness with a value of 20 for soy and 10 for maize, the relative difference amounts +100%. There were comparisons of soybean with roughly 16 different arable crops, with maize being the most common. We averaged all comparisons between soybean and other mainly non-leguminous arable crops (grouped as “other crops”) to allow us to consider all the data available. We treated observations from different experiments and years as replications for the testing of effects with the minimum number of replications being four. In a second evaluation step, we combined data on groups of organisms to generate estimates for all arthropods. We also aggregated data according to functional groups. Species that are primarily herbivores were distinguished from all predominantly predatory taxa such as spiders and ground beetles which together with parasitoid wasps were grouped as natural enemies.

The evidence available allows us to consider the effect of soybean with reasonable confidence. Soybean crops had overall a higher activity density and species richness of arthropods compared to widely grown crops (Figure 1). Herbivore activity, density in particular was higher, followed by predator activity density. The species richness of natural enemies was also higher in soybean compared to other crops. Furthermore soy increased the activity density of mites and ground beetles. From nine individual comparisons with other arable crops, soy had a higher activity density of spiders in six cases. For the assessment of the sequence two kinds of data were available; one in which soybean was part of two sequences, but one sequence was short (two years), and the other was long (four years). The other kind of data were comparisons between sequences with and without soybean. For arthropods as a whole, the differences in diversity and activity density associated with crop sequence length or soybean use or absence was slight. A pre-crop effect could be identified on the activity density of arthropods and ground beetles in particular, which was respectively higher in the crop succeeding soybean. Most diversity parameters of arthropods in soy were lower in soy with cover crop in comparison to soy as sole crop. Intercropping of soybean with a partner crop revealed no clear picture regarding activity density, species richness or Shannon diversity of arthropods. Landscape heterogeneity, increased by the presence of semi-natural habitats, positively affected arthropods in soybean crops. A high percentage of cropped area, including soybean cultivation, in a landscape resulted in losses of activity density and species richness of e.g. wild bees, other pollinators, ants as well as natural enemies and herbivores. Across all management factors, only for weed control we found reliable information: increasing weed control measures reduced arthropod activity density and species diversity.

The biodiversity in an arable crop is the consequence of the crop species, crop management, and its landscape context. In assessing the findings presented here, it must be remembered that all observations relate to biodiversity-depleted agro-ecosystems. The differences observed generally relate to very few studies and hence a low evidence base, in particular for European soy-based cropping systems. That said, there is still reasonable consensus in the literature that soybean crops can support a higher abundance and species richness of arthropods compared to other crops. This may be due to the protein-rich biomass combined with the more open canopy architecture in the young crop. The increased activity density of herbivores in soybean compared to other widespread crops is striking, even if it is based on few replicates. Presumably, this is related to the aforementioned attractiveness as a food source. However, it is critical to consider whether increasing soybean cultivation in Europe would have to be accompanied by more intensive plant protection measures with potentially negative effects on non-target arthropods. The observed pre-crop effect on arthropods may be related to the high nutrient value of soybean crop residues. It could be expected that a higher length of a crop rotation would increase microvariability in the field over time but such impacts were not thoroughly investigated so far.

The evidence available indicates that the introduction of soybean into cropping systems otherwise dominated by cereals increases infield activity density and species richness of arthropods. All in all we think that, especially considering the wider agro-ecological contexts in Europe, the integration of soybean in European crop sequences is likely to have a positive effect on in-field biodiversity, as long as soybean cultivation would stimulate crop diversification.

In order to increase the availability of information regarding this topic we recommend to increase systemic research on biodiversity impacts of grain-legume supported cropping systems in Europe. A cataloguing of organism groups (trophic groups and taxa) associated with the respective arable crops as well as cropping systems with and without legumes especially in grain legumes other than soybean from field to landscape scale would be helpful for guiding further developments of grain legume cultivation. 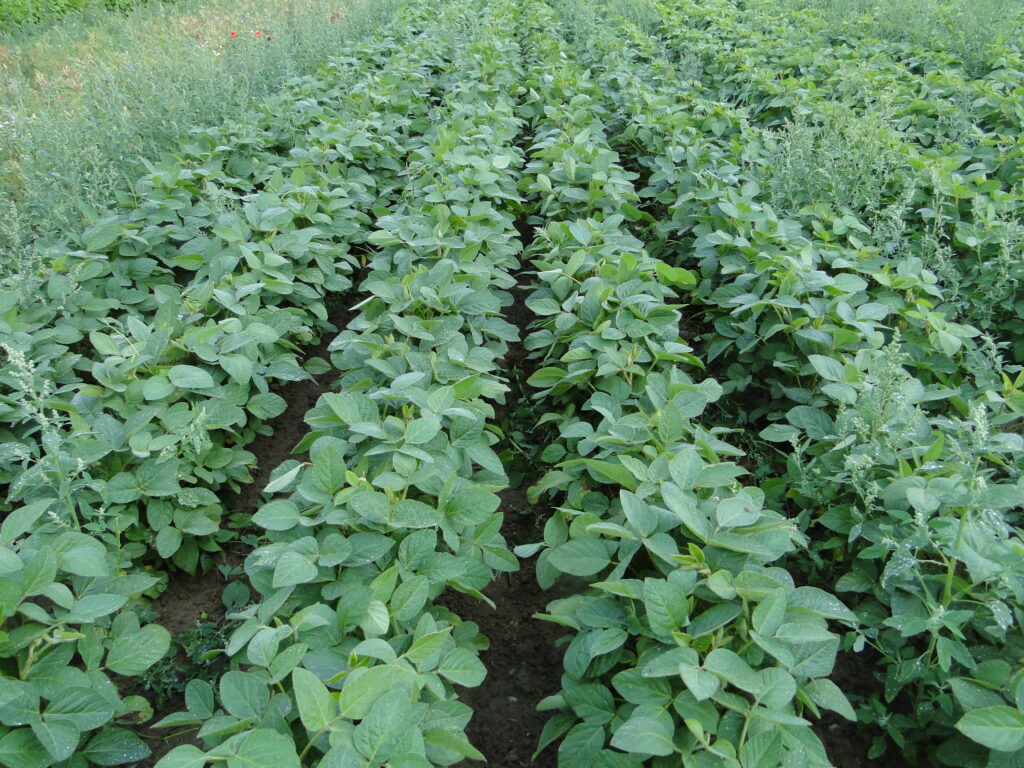 Activity density (AD): the number of individuals or species moving over a defined area or crossing a defined border in a given time.

Species richness (S): the number of species per unit area.

Shannon diversity index (H): an index of diversity based on the number of species and individuals per species.

Evenness (E): how equal the distribution of individuals of species is between samples. This is a structural parameter for comparing different communities.