A case study in Bulgaria
Anelia Iantcheva, Radka Nedeva, Apostol Apostolov
Posted: 25.02.2022
Imported defatted soybean meal is the most common supplemental protein source used for feeding pigs. It is available as a commodity world-wide. Most soybean meal used in Europe is imported from South America. Partially replacing imported soybean meal with extruded full-fat soybeans in pigs’ diet could be an attractive and financially beneficial alternative in a country like Bulgaria where the facilities for production of soybean meal is not widely available. It is especially attractive in mixedfarming systems where soybean production and use (in feed) are closely connected. We investigated the inclusion of extruded full-fat soybeans in a diet of pigs to identify feed formulations for mixed farming systems based on scientific evidence. Local soybean production and processing can have a positive economic effect on livestock enterprises. Extruded full-fat soybean contains less protein and lysine than soybean meal, but is richer in fatty acids. The high fat content provides a convenient source of adding fat to pig diets. The addition of extruded full-fat soybeans had a positive effect on animal nutrition and caused less oxidative stress, as indicated by the lowest levels of malondialdehyde (MDA) in the blood plasma. This indicates that the full-fat soybean reduced lipid peroxidation. Further, Đorđević et al. (2016) found that the addition of oilseeds or full-fat soybeans to pig diets resulted in pork meat with higher content of polyunsaturated fatty acids. 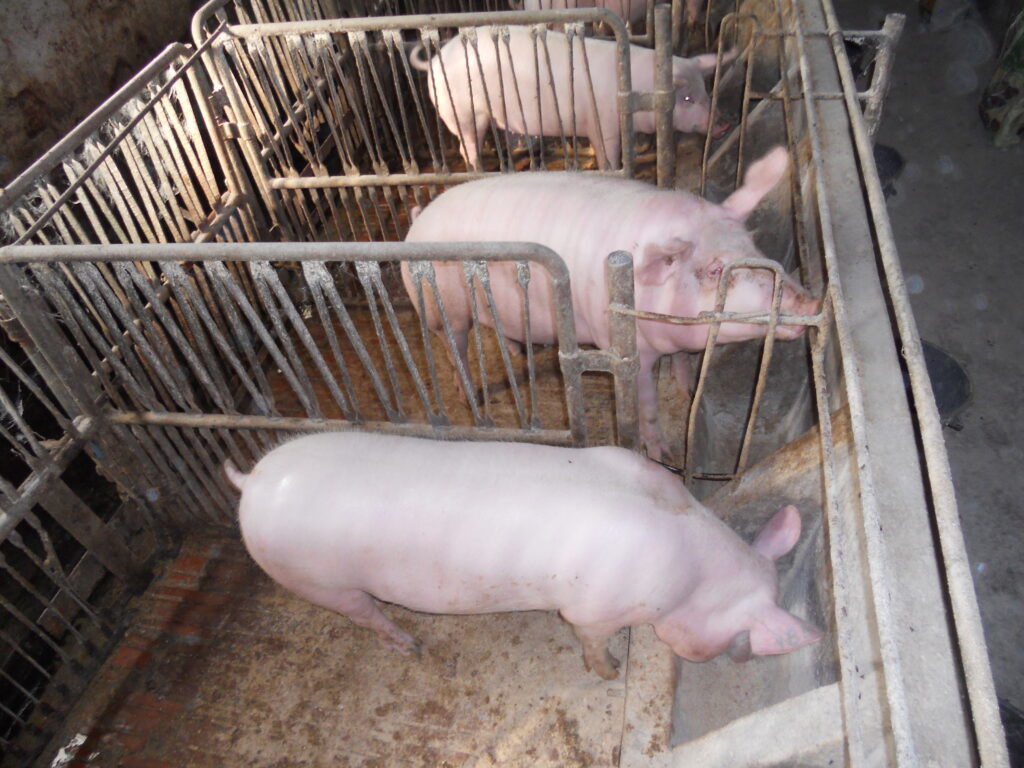 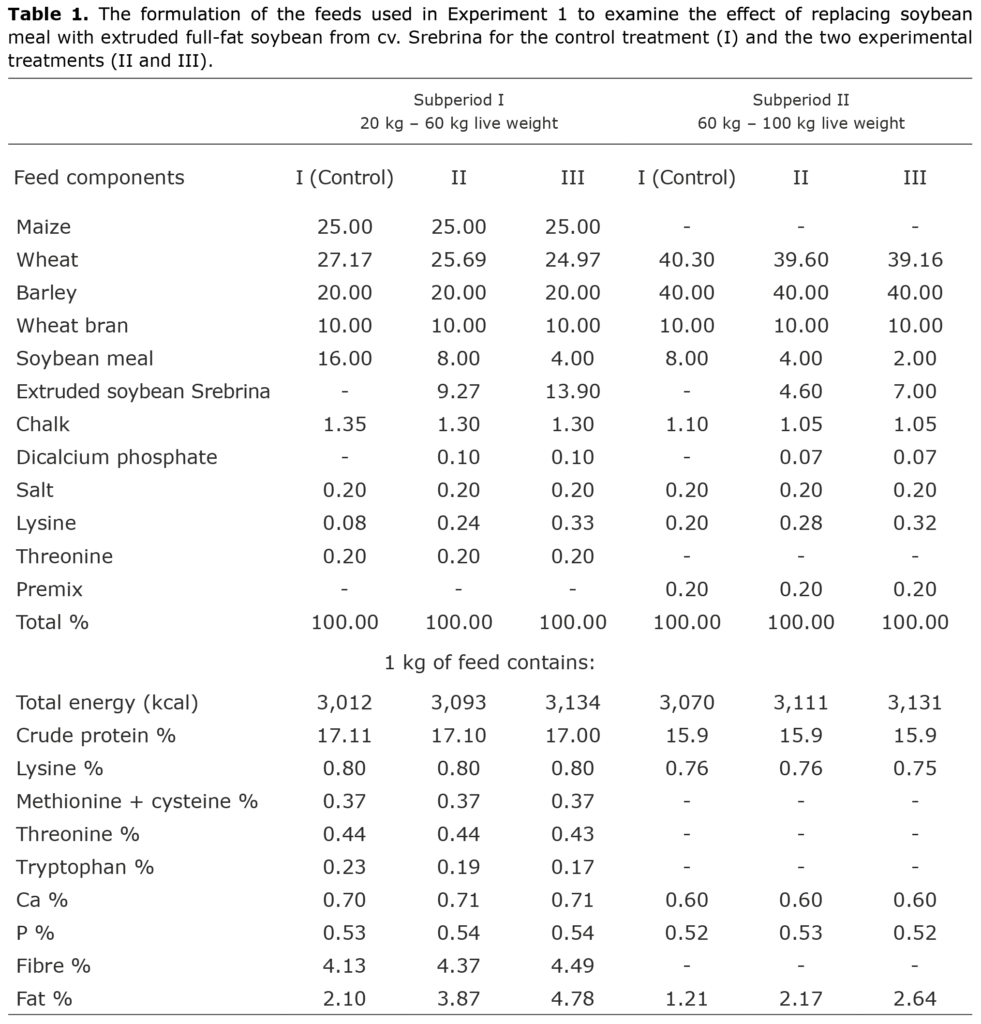 In the experimental group, 30% of the soybean meal (by was replaced by extruded full-fat soybean on a protein equivalent basis (Table 2). Both experiments were performed over two rearing periods: the first from the weanling pigs 20 kg to 60 kg live weight, and the second from 60 kg to the end of fattening. Blood samples were taken at the end of Period 1 at 60 kg live weight to determine the values of MDA in blood plasma. This indicator was studied as a marker of oxidative stress. 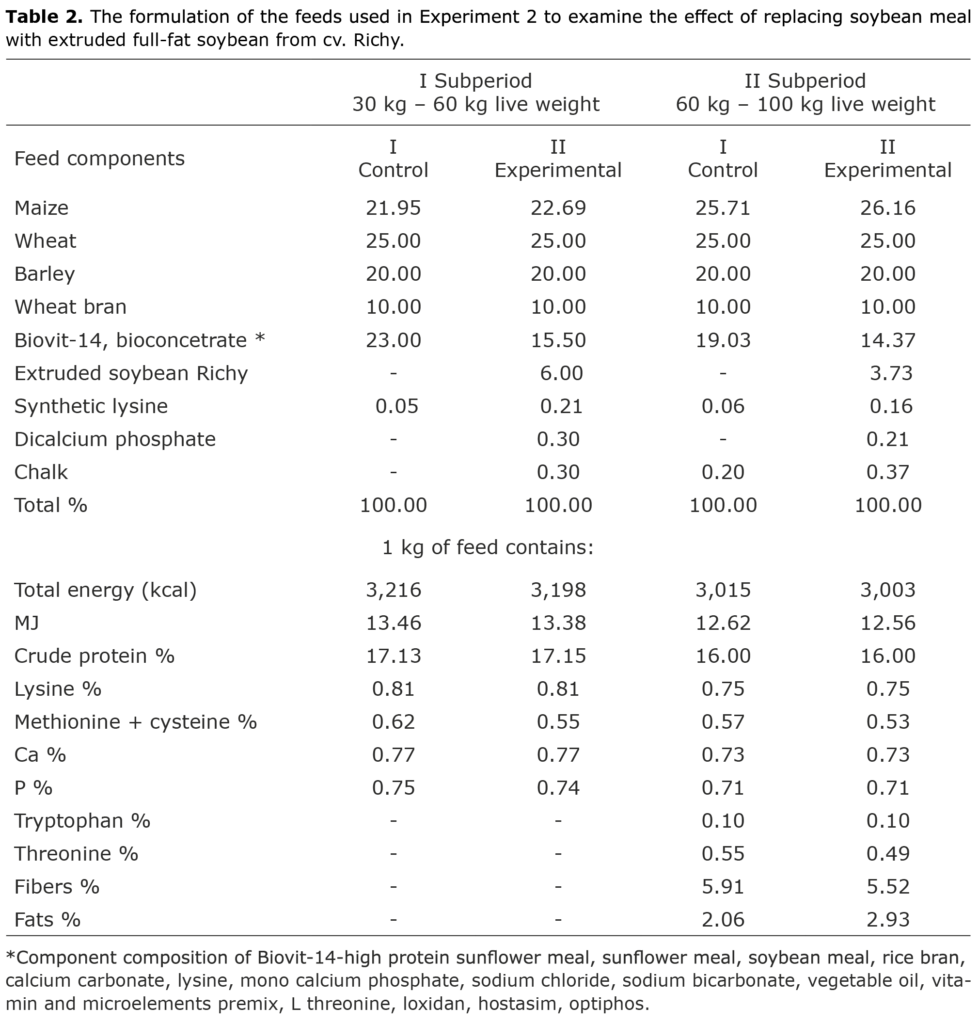 The formulation of the feeds used in experiment 1 to examine the effect of replacing soybean meal with extruded full-fat soybean from cv. Srebrina for the control treatment (I) and the two experimental treatments (II and III).

Feed intake, growth and feed conversion efficiency were measured. From the results of the first experiment we conclude that extruded fullfat soybean cv. Srebrina could be successfully included in the protein component of feed for growing pigs with a live weight of 30 to 60 kg, thereby replacing 50% of soybean meal on the basis of protein equivalent. In experiment 2, there was practically no difference between treatments for feed and nutrient intake and there were no significant differences in the average daily gain and feed conversion efficiency.

We conclude that extruded full-fat soybean can contribute up to 30% of the protein in the ration for fattening pigs without adverse effects.

Malondialdehyde (MDA) is an end product of lipid peroxidation and is widely used as an indicator for the determination of oxidative stress. Lower MDA blood plasma values indicate lower oxidative stress. The data from the first experiment showed that animals from the experimental Group III with a higher percentage of extruded soybeans included in the feed composition were found to have the lowest level of detected MDA in the blood plasma (0.0277 nmol/μL) followed by Group II (0.0310 nmol/μL) and the control (0.0337 nmol/μL). All differences between group means were significant. There were also differences in the amount of MDA in blood plasma of animals from two experimental groups in the second experiment. The level of MDA in experimental Group II was 0.0438 nmol/μL while that in the control group I was 0.0594 nmol/μL.

The information provided is the result of observations, discussion and experimental work of authors who are part of the Bulgarian Legumes network.