Ulrich Quendt
Posted: 10.09.2021
Faba bean (Vicia faba L.), also called field bean, is rich in protein and energy. In particular, faba bean complements cereal well in the feed ration due to the high content of lysine. Faba bean can replace or supplement soya and can be used without further treatment. The crop can be sold to compound feed producers. But a better profit margin is achieved with on-farm use than when sold to the market. This note describes two practice cases where home-grown grain legumes are an important component of GMO-free feed rations.

Uwe Brede and Babett Löber grow field bean cultivar Bilbo on their organic farm on Domaen Niederbeisheim, near the German city of Kassel. They keep laying hens and young hens, together about 30,000 birds. 100% organic feed rations is a matter of course for them. Faba bean is a valuable home-grown source of protein. They took over the farm in 1995 and switched to organic farming in the same year. Non-inversion (ploughless) tillage was introduced soon after organic conversion. „Today we can till our light limestone soils very efficiently and quickly“, reports Mr Brede. „The minimal tillage system with power harrowing instead of ploughing has established itself and has become an indispensable part of our business.“ Uwe Brede is a pioneer of organic agriculture. He is fully committed to a cyclical flow of nutrients on the farm. Organic seed production and the use of 100% organic feed rations in his laying and young hens is part of this.

Uwe Brede co-founded the Bäuerliche Ökosaatzucht e.G. as a cooperative. One focus of the co-operative is the systematic identification and maintenance of crop cultivars for organic farming. This includes maintaining and multiplying the field bean Bilbo. Wheat, barley, rye, triticale, spring barley, oat and grain legumes are multiplied on the Niederbeisheim estate on around 90 hectares (ha). In addition, in cooperation with a seed company for fine-seeded legumes, red clover is propagated on 20 ha. In total, the farm has around 150 ha of arable land and 27 ha of grassland.

There is capacity for around 10,500 laying hens and for the rearing of around 18,000 young hens. “The development of this operation was driven by good local conditions and favourable market developments“ says Mr Brede. “This produces a high-quality organic fertiliser for our crops giving us a good nutrient balance from the closed nutrient cycle“ All eggs are marketed with a partner company. There the eggs are sorted, packed and marketed.

The laying hens have been fed 100% organically for years with a consistently good laying performance. A needs-based amino acid supply in the organic rations is important. With purely home-grown protein feed components, this can only be achieved by upgrading the rations using valuable feed components such as oil cakes (Table 1). Dehulling of faba bean enhances the value of the home-grown protein feed components further. This takes place in the on-farm mill where the hulls are separated from the seed and removed via the air classifier. And it works very well: de-hulling increases the protein content from 24 to 36%. 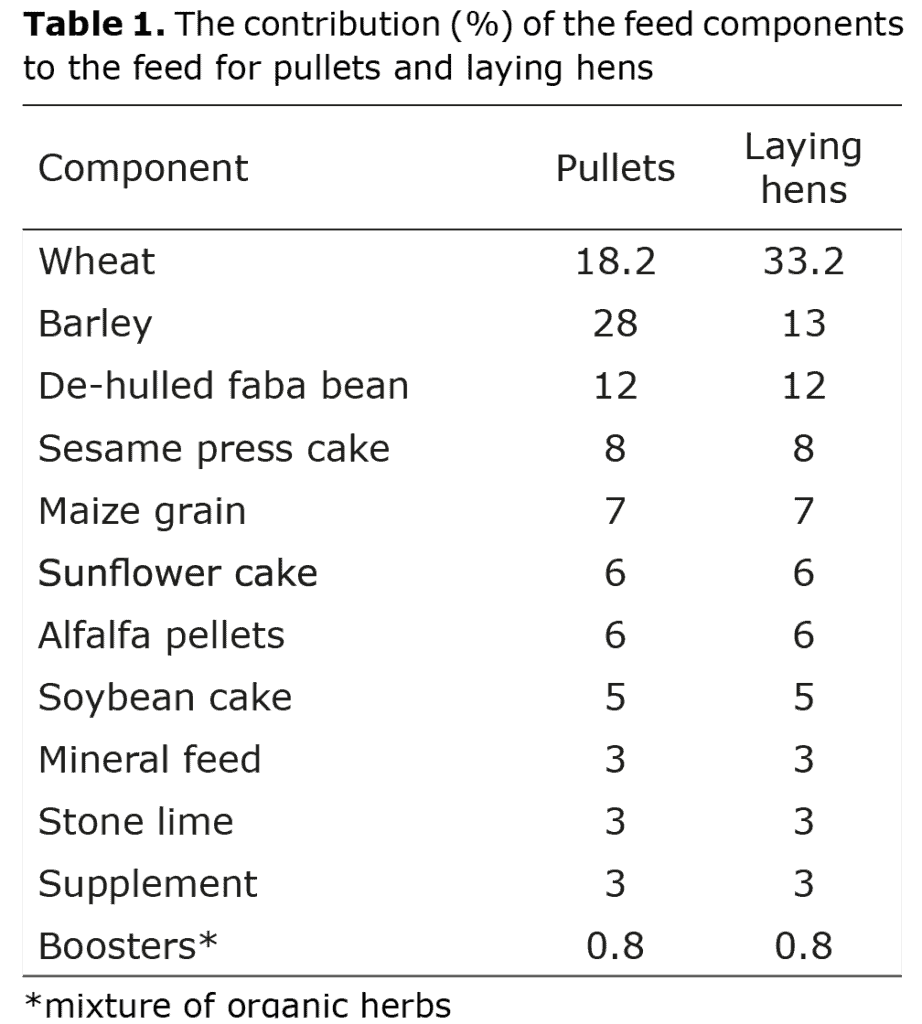 Manfred Hermanns keeps 54,000 hens in barn, free range and organic systems. He mixes the feed himself and also uses faba bean as a domestic source of protein.

Mr Hermanns is convinced of the advantages of faba bean. „Faba bean is home-grown, has short transport routes, is GM and gluten free, and the crop supports pollinating insects. But it wasn‘t as simple as it sounds right from the start. When I tried to feed field bean to the hens a few years ago, it was a flop. The hens rejected the feed due to the high content of the poorly digestible glycosides vicin and convicin.“

Farmers are now growing new cultivars such as Tiffany, which are low in glycosides and are more palatable for hens. Mr Hermanns started cautiously with a 1% inclusion of faba bean which he increased gradually to about 7% (Table 2). The raw protein content and the content of the amino acids lysine, methionine and threonine were more favourable than expected. This has a positive effect on the health of the laying hens. It took the farmer several years to optimise the ration. The reward is a healthy flock, hardly any problems with feather pecking and pest infestation. And if there are any problems, which can also be caused by external influences such as high tempera-tures, Mr Hermanns uses the opportunity to immediately vary the composition of his own feed ration. „The feed is better and even cheaper,“ says the farmer happily. He has acquired a small feed mixer consisting of three different mills and a conical mixer. He grows 36% of the animal feed himself. Except for soybean, the rest comes from other farms in the region.

Mr Hermanns would like to replace the soybean with sunflower meal in the long term. Due to the regional production concept, the eggs cost on average two cent more than comparable eggs from other farms. „This is only possible because we communicate the added value of our products to our customers and because they want to support our idea,“ explains the farmer. 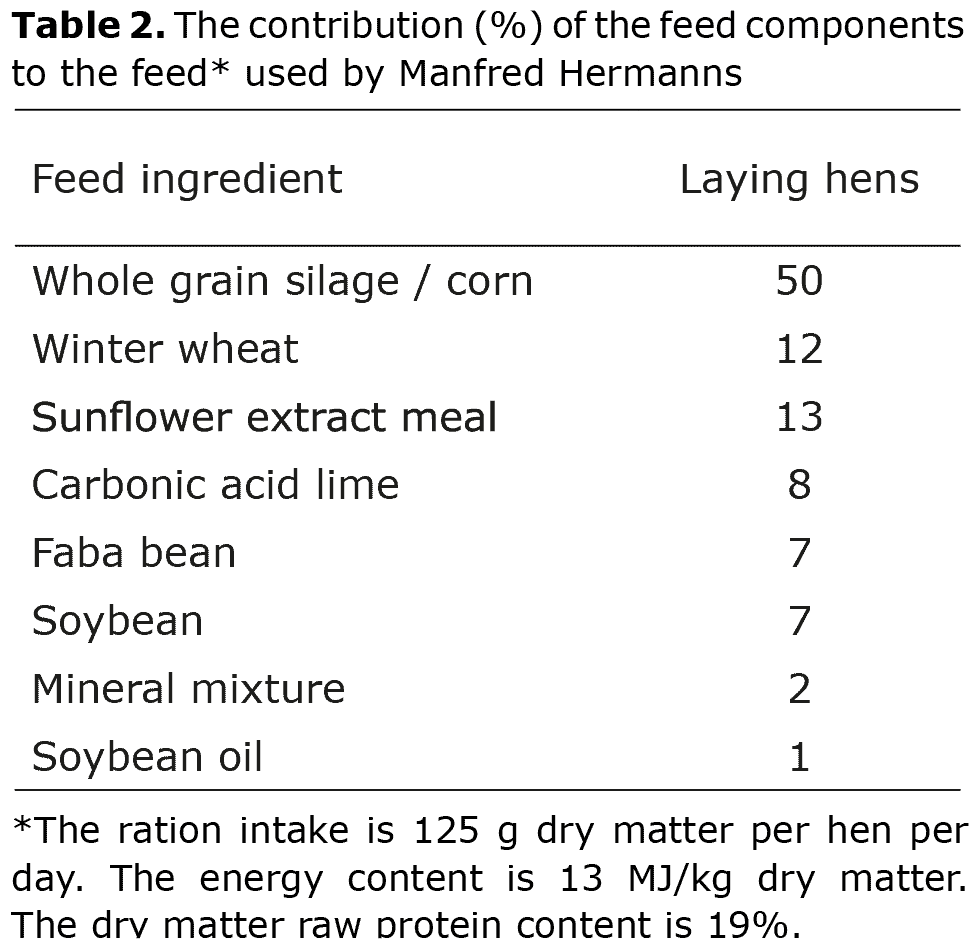