Experience from Ireland
Michael Hennessy, Jürgen Recknagel, Sheila Alves, Kevin Murphy, Brendan Burke
Posted: 10.05.2022
The cultivation of soybean has increased considerably in Europe in the last decade supported by the development of cultivars adapted to high latitude and shorter or cooler growing seasons. These cultivars are now grown in countries where climatic conditions were considered unsuitable for soybean production until very recently, such as in southern England, Lithuania and Denmark. However, reports on the soybean cultivation at high latitudes (above 52°N) in maritime areas where cool and wet conditions occur remain scarce. This article is about the experience of growing soybean at Oak Park Research Farm, Teagasc in Carlow, Ireland. The trials at Oak Park showed that the soybean cultivars tested did not mature early enough for harvest under suitable conditions. From these observations, we can say that these new early cultivars are not well-adapted to Irish conditions for the production of grain for feed and food markets. However, soybean was successful grown as a whole crop, harvested while still green/immature. Bird feeding of emerging seedlings caused very significant damage in the Teagasc trials. 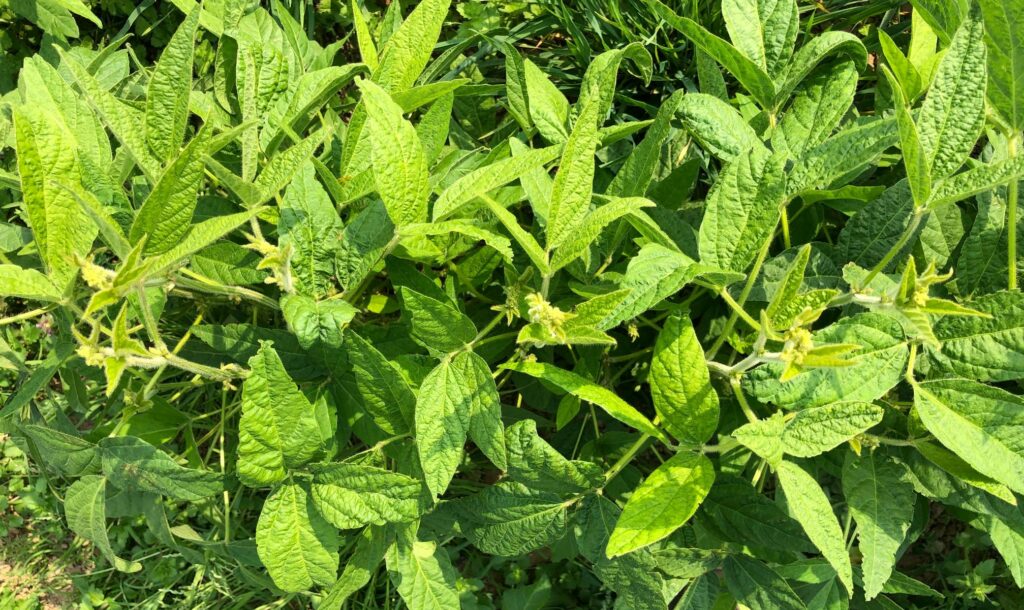 The potential for adapting soybean adaptation to north-western Europe

The cultivation of soybean in Europe has increased considerably aided by cultivars that mature early. Matching cultivar to location combined with optimal agronomic practices (sowing date, seed rate, and distance between rows) is fundamental to viable and profitable soybean production in any environment. Soybean is a warm season legume, with growth interrupted when temperature drop below 8°C. It is also a short-day crop. This means that flower development is suppressed in the longday conditions of summer in most of Europe above 45°N, unless the cultivar is day-neutral. The crop requires a sufficient number of warm days to mature, usually expressed by growing degree-days (GDD), using 10°C as the base temperature. Crop heat units (CHU) are also used. The calculation of CHU uses 10°C and 4.4°C as the daytime and night-time base temperatures respectively. The minimum reported values for soybean are 933–1,041 GDD (base 10°C) and about 2,300 CHU. This requirement for heat and for day neutral cultivars makes the production of soybean above about 52°N (approximately the line from Cork in Ireland to London across to Berlin) particularly challenging, especially in north-west Europe where long summer days are combined with relative cool maritime conditions, such as in Ireland.

The first requirement for cultivation under the conditions described above is to use day length neutral cultivars. This is met by cultivars classified in the zero maturity groups (0, 00, 000, and 0000). The second requirement is rapid progress through all development stages to reach maturity in September under relatively cool conditions. The cultivars that most meet this requirement are commonly classified as 000 cultivars, with a few even earlier than these (0000).

Fifteen varieties of soybeans (Table 1) were selected in consultation with the Soybean Network of the Legumes Translated project, soybean breeders and merchandisers. Seed was inoculated with rhizobium (LegumeFix, Legume technology, UK), and sown at a depth of 3–4 cm, using a Haldrup planter, on 22 May 2019 and on 7 May 2020. The total plot area was 18 m2 (1.2 m x 15 m). Each cultivar was tested using two row widths: 40 and 60 cm. A randomised block design was used with 4 replicates. Details of the weather from March to October 2020 are presented in Figure 1. 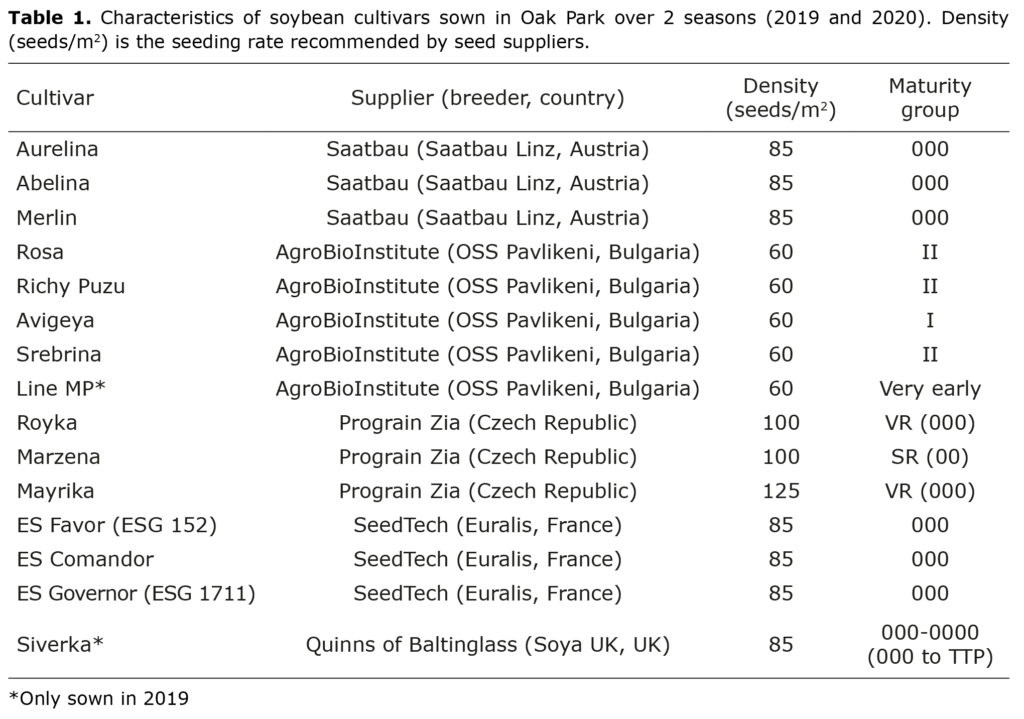 In the 2019 season, white sprouts of the sprouting soybean in the field were observed about 3 weeks after sowing, without the cotyledons. Only one seedling has survived beyond the cotyledon stage. A flock of pigeons that earlier in the season grazed on an adjacent oilseed rape field may have been responsible for the unsuccessful trial.

In the 2020 season, emergence was observed from 20 May on. The emergence rate was low and not uniform, probably related to the cold period observed just after sowing (minimum air temperature from -0.9 to 5.7°C and soil temperature from 12 to 15°C, between the 10th and the 15th of May) and the relative low air temperature throughout the month of May (Figure 1). Some bird damage was also observed. 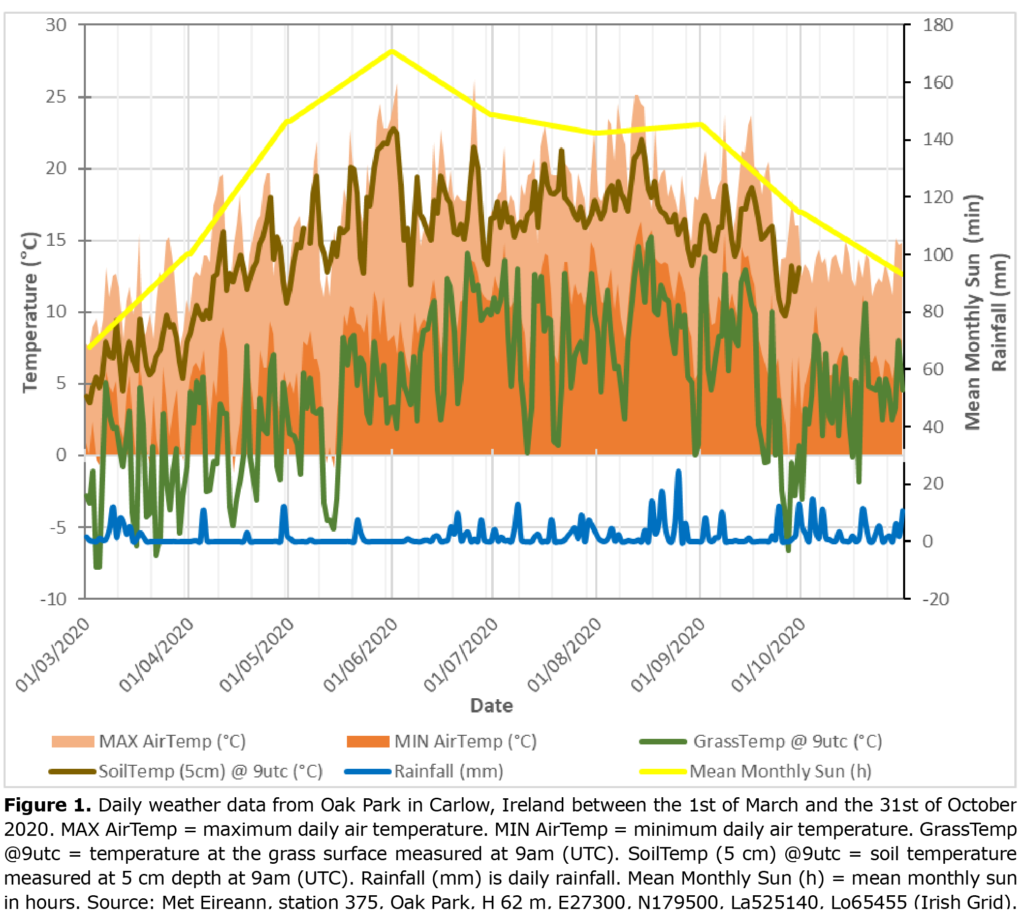 Flowering was observed in mid-August and pod development and seed filling from beginning of September on (Figure 2). Earlier flowering of cultivars with petals that not fully unfold may have escaped the untrained eye. In the cultivars that are not day neutral, such as the ones in maturity groups I and II, flower initiation may have been inhibited by the long summer days and delayed until nights lengthened to a cultivar-specific minimum. Although plants begin maturing between the months of September and October with hardening pods, there were still significant foliage in mid-October. 2,390 CHU were accumulated in the period between sowing and 30 September in 2020. 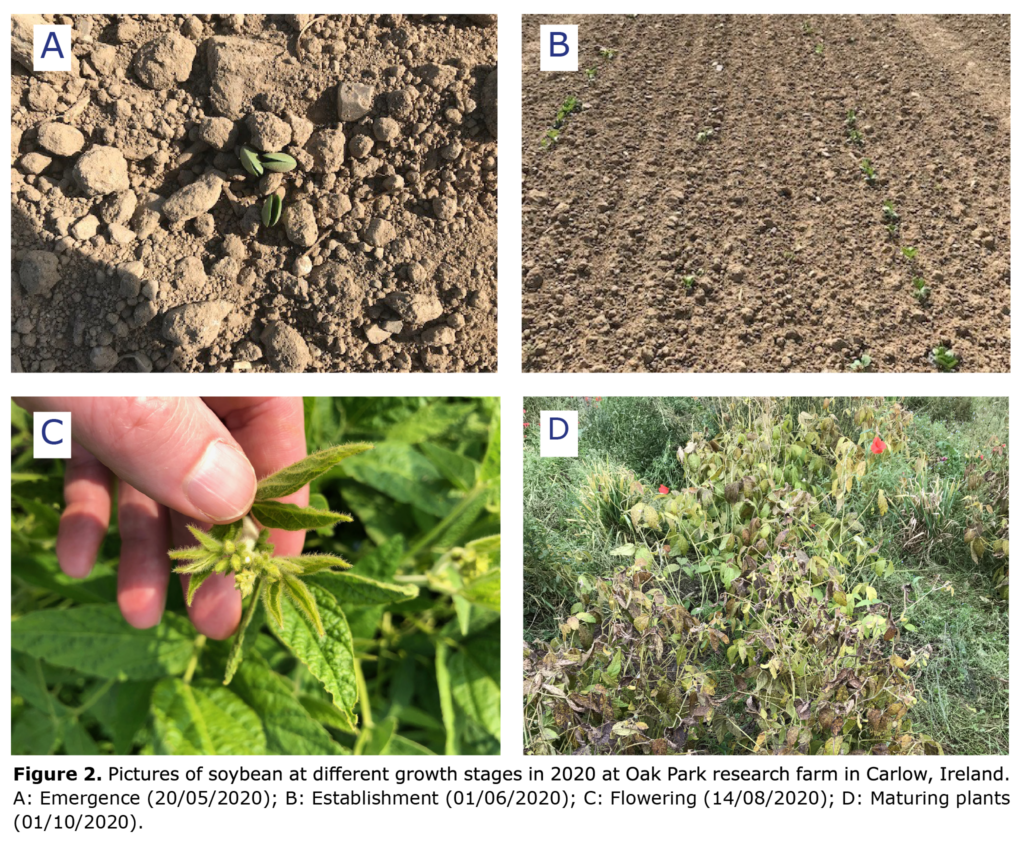 The weed-burden was high, related to the poor plant establishment resulting in poor plant competition throughout the season but also due to a lack of suitable herbicides registered in Ireland for weed control in soybean. Soybean cultivation in Carlow for grain production may not be feasible as CHU only marginally exceed 2,300 (growing season mean of 2,383 (1 May–30 September), over the period of 2005-2021), considered as the minimum accumulated units for a feasible soybean crop. Lower CHU values are accumulated if the growing period is shortened due to later sowing and earlier harvest, as presented in Figure 3.

Relevance for other parts of north-western Europe

Considering the experience of other European countries such as Germany where soybean is cultivated, the potential growing season for soybean in Ireland and other north-western European countries lies between beginning of May and the end of September. However, the climate in Germany allows soybean sowing from beginning of May on when soil temperature reaches 10°C and is rising steadily through May. The beginning of May is still quite cool over most of Ireland. Consequently, consistent and rising soil temperatures above 8–12ºC, required for establishment, are reached only in the second half of May. Low early season temperatures reduce yield. On the other end of the growing season, the risk of rainfall in Ireland increases as autumn progresses.  Harvesting in September rather than October reduces the risk of excessive moisture in the crop and grain. As a consequence, the growing season for soybean in certain regions in Ireland would most probably be shorter compared to in Germany. This reduces the period during which heat is accumulated by 200-300 CHU, depending on the year (Figure 3).

Based on these observations, the feasibility of soybean production could be assessed in the most promising locations. Only the earliest cultivars, usually classified in maturity groups 000 and 0000, are potentially suitable for Irish conditions. Based on authors’ experience, about 2,600 CHU, or about 1150 GDD (base 10°C), are required from emergence to harvest. Based solely on CHU, soybean production may be feasible in areas of County Cork, such as around Cloyne, Linsaley, where calculated CHU were close to those observed in German soybean producing areas such as in Tailfingen (altitude 450 m) and Ochsenhausen (altitude 625 m) in Baden-Württemberg (Figure 3). In the other locations considered, the CHU were lower than the minimum required in at least 3 out of 10 years, and never surpassed 2,500. However, considering that more daylength may substitute some low temperature, it might be interesting to test soybean cultivation for several years also at those places and evaluate if this effect is sufficient for a sustainable production. Ideally, pea and/or faba bean will also be sown to get an idea about the relative performance of those 3 grain legumes at each site. 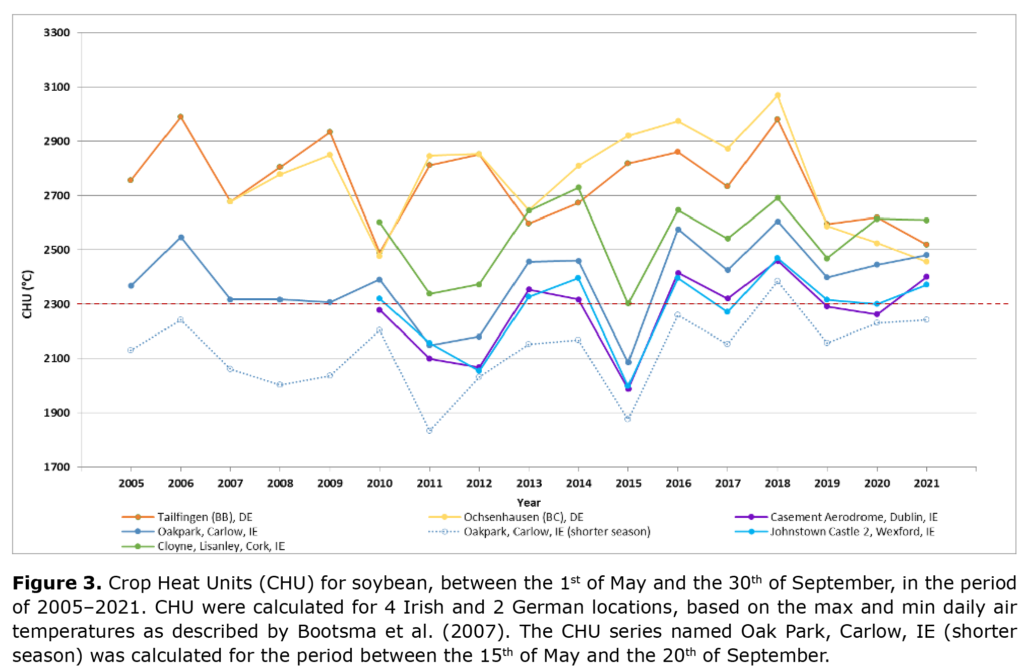