Anja Bonzheim, Thorsten Haase, Philipp Roth
Posted: 13.03.2022
Silage maize is grown over a large area and is closely associated with cropping systems that lack diversity with relatively high impacts on soil quality and nature. Mixed or intercropping can reduce the risk of erosion, increase crop biodiversity, and improve nitrogen utilisation.

The combination of maize and runner bean (Phaseolus vulgaris var. vulgaris), which originated in Latin America, has this potential and has been the subject of more intensive research in Germany and Switzerland for several years. Runner bean is closely related to the ‘bush’ or ‘French bean’. It has a climbing stem. A mixture of maize (Zea mays L.) and runner beans, if well planned, differs only slightly in yield from maize pure stands. The combination increases the protein content of the silage. Maize silage is low in protein and consequently maize silage-based diets require protein supplementation. In this form of intercropping, the maize serves as a climbing aid for the high-protein bean boosting the protein content of the silage. In addition, the runner bean fixes nitrogen, especially where the nitrogen supply in the soil is low. The additional soil cover in the row suppresses weeds, reduces erosion risk, and promotes biodiversity.

The most important practical consideration is the choice of bean cultivar. The key traits are seed size, time of maturity, and the phytohemagglutinin (phasin) content. Phasin is a toxic substance found in raw phaseolus beans. Seed cost is also a consideration.

For some years now, breeding has concentrated on improving the suitability of both mixture partners for mixed cultivation. Where silage for feeding is grown, low-phasin, high-yielding, small-seeded cultivars with a high protein content should be selected. The cultivar WAV 612 with a thousand grain weight (TGW) of only 225 g is an example. The grain size of the beans is an important feature. The large seed means seed costs are high and sowing the beans and maize together using precision seeders is difficult. The seed of the bean and maize should be similar in size if they are to be sown together using a precision seeder. Cold-tolerant bean varieties that have a high proportion of early, well-formed pods up to harvest should be used. It is also important for the maize to have good stability with good resistance to stem rot. The dry matter content of runner bean is low at harvest (about 20%) and decreases with time as harvest is delayed into late autumn. Late harvesting should be avoided. Early maturing maize cultivars should be chosen. Otherwise, the dry matter content of the mixture could be too low due to the bean content, making successful ensiling more difficult. The earlier ripening maize cultivars can compensate for the low dry matter in the beans because they have a high dry matter content at harvest.

Sites with medium to good water supply and low to moderate weed pressure are suitable. The bean seed should be inoculated with the appropriate rhizobia where the runner bean is grown on a field for the first time. Simultaneous sowing of maize and beans has proven to be more cost-efficient and practical. Conditions are often already too dry if the beans are sown later than the maize. In addition, later sowing of the beans disturbs the soil shield effect of pre-emergence herbicides greatly reducing their effectiveness. The bean is more frost sensitive than the maize. Late frosts can damage the bean while the maize is unaffected. Therefore, depending on the region, the joint sowing should take place somewhat later (around the beginning of May) than the sowing of the pure maize crop. The result is the seed of both species is concentrated in the same rows which leads to shading and thus suppression of weeds within these rows. Widely used maize row spacings are suitable. However, if the row spacing is lower than 50 cm, there is a risk that the beans will interfere with the neighboring row, which can lead to problems at harvest. The sowing depth is a compromise between the requirements of both crops but should tend towards that of maize as the main biomass producer.

The target plant density is in the range of 6-9 plants/m2 for maize (only very slightly reduced compared to pure stands) and 3-6 plants/m² for beans. The proportion of the crop biomass provided by the bean increases with increased bean sowing rate but the total dry matter yields tend to be reduced. It is recommended not to set the bean proportion in the mixture too high due to the phasin content and the weight and long reach of the beans, which can become a problem during harvesting due to breakage of the maize stems. The high performance of the maize must be protected. It should be complemented by the bean, but not hindered. The basic nutrients phosphorus and potassium should be in the optimal range. Farm manure can be used and, depending on the supply situation, mineral fertiliser can be added.

Only pre-emergence herbicides can be used. The post-emergence herbicides otherwise approved and commonly used on maize in Germany may not or cannot be used on runner bean. The only herbicides that can be used in Germany are pendimethalin (e.g., “Stomp Aqua”) and pendimethalin plus dimethenamid P (e.g., “Spectrum Plus”). The use of mechanical hoeing is also an option. A hoeing operation can be carried out shortly before the closing of the crop canopy when the effect of the soil herbicides has worn off.

The use of a stale seedbed is common in organic farming. This may be combined with careful tined weeding at the 3-leaf stage of the maize onwards. Inter-row hoeing with crop protection plates can also be used from the 3-leaf stage of the maize. Later on, the row can also be carefully ridged. However, maize and runner bean plants should not be covered with soil. The mixture is harvested with a forage harvester fitted with a maize header, which may be equipped with a side knife that cuts through the mass of climbing beans.

The cultivation of maize-runner bean mixtures is eligible as a separate crop under the crop diversification agri-environmental measure in some German federal states if the runner bean accounts for at least 25% of the crop plants.

Silage maize is grown on 2.3 million hectares in Germany. This is the second largest crop area after wheat. Especially in regions with a high proportion of maize, the introduction of another crop can promote biodiversity and the public acceptance of cultivation systems. Initial studies indicate that the flowering bean in the mixture seems to have a particularly positive effect on bumblebees.

The beans fix nitrogen where soil mineral nitrogen supply is low. Biological nitrogen fixation is greatly reduced and may be prevented completely where soil supplies are high enough for good crop growth. Research has shown that the maize-bean mixtures are better able to maintain total dry matter yields compared with maize pure stands where nitrogen fertilisation is restricted. In addition, a reduction in N fertilisation in pure and maize-bean mixed stands lowers post-harvest mineral nitrogen level in the soil. These observations suggest that the mixed stand is able to utilise soil mineral nitrogen but that the beans compensate where there is nitrogen deficiency. This can be particularly interesting in regions or situations where the application of nitrogen-containing fertilisers is constrained due to legal restrictions.

The shading effect of runner beans in maize stands suppresses weeds and can reduce the need for mechanical control measures in organic farming. Due to the spreading early growth of runner beans and the higher total number of plants per m², the soil is shaded more quickly and unproductive evaporation from the soil is reduced. This tends to help the crop survive dry periods. Maize cropping is associated with a high risk of soil erosion due to the late sowing in spring. This problem can be partially alleviated by the faster soil cover in mixed cultivation with beans. 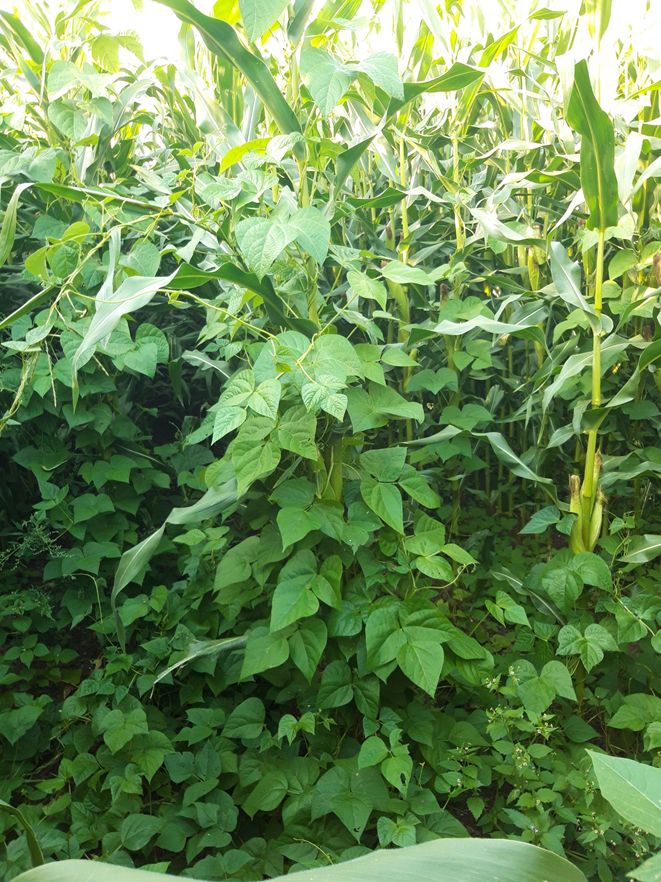 Maize and bean mixed in a row

A mixed–silage of maize and beans can be used for dairy cattle and as a roughage in pig fattening. Because of its high phasin content, maize-bean silage was formerly rarely used in feeding. However, the proportion of beans in the mixture is usually only 10-15% of the dry matter (the decisive factors are seed density and timing, as well as the choice of variety). Ensiling reduces the phasin content. In addition, breeding is increasingly focused on low-phasin cultivars. However, the proportion of beans can also be kept low by ensiling with pure maize, so that the phasing content of the maize-bean silage only very rarely becomes a constraint.

The ensiling of the crop is usually straight-forward if a dry matter content of about 30- 35% is achieved. In feeding trials, maize-bean silage (9% bean dry matter in maize-bean silage) led to the same milk yields or, in pig feeding, to the same fattening performance and carcass quality with comparable animal health. The silage is both well absorbed and digested by dairy cattle and pigs where introduced gradually. Phasin is partially degraded in the rumen of cattle. Only the urea content in the milk can increase slightly.

Böhm, H. et al., 2016. Improvement of protein and energy supply in ruminants and monogastric animals through mixed cultivation of maize with pole beans or fire beans. In: BLE 2016. proceedings congress “Legumes – Signposts for a more sustainable agriculture”, 3 and 4 November 2016 in Berlin, pp. 46–48.

Carrel, K., 2020. Update on the cultivation of mixed maize-bean crops. At: www.strickhof.ch/publikationen/aktuelles-zum-anbau-von-mais-bohnen-mischkulturen/