Leopold Rittler, Kristina Petrovic, Dragos Dima and Gerald Hackl
Posted: 04.11.2021
Downy mildew is caused by the plant pathogen Peronospora manshurica. Downy mildew is a common fungal disease of soybean, found worldwide. It is soil and seed-borne and infection may result in yield losses of 5 to up to 10% in severe cases. So far, in Central Europe the damage caused is observed to be low. This practice note provides information on the pathogen‘s biology and control of the disease presenting a foundation for effective management. 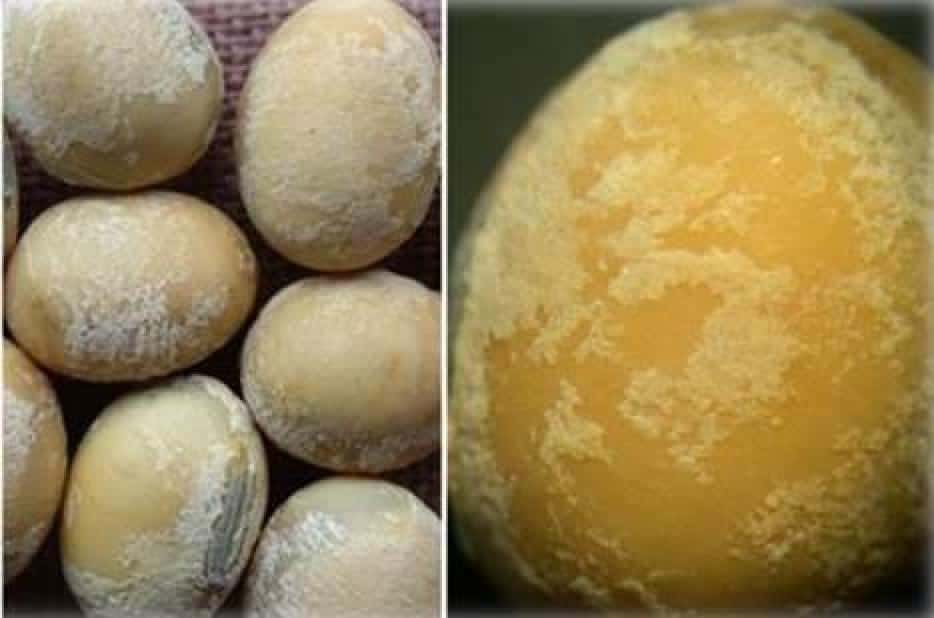 The plant pathogen P. manshurica exists currently in more than 30 different races. There is little relevant difference between races in virulence and response to management. This might change due to the ability of P. manshurica to rapidly adapt to the resistance genes in commercial cultivars.

Resting spores survive from over-winter on leaf debris. They are also carried on seed. In most situations where soybean is rotated with other crops, the main infection route is infected seeds. An infected seed results in systemic infection of the whole plant causing stunting and mottling of the leaves. Symptoms are evident at all growth stages. Spores spread by wind in the growing crop. Initial disease development is favoured by a combination of frequent rainfall, heavy morning dew, high relative humidity, and moderate temperatures of 18–22°C. If this phase is followed by a prolonged dry spell, the infection risk is further increasing.

The most visible symptoms are 2–4 mm angular spots on the leaves. The initial symptoms are small pale green or yellowish spots which merge with time. On the reverse side of the leaf, a tan to grey covering forms, especially under wet and humid conditions.

The early symptoms are present at the two (V2 grown stage) to three (V3 grown stage) trifoliate leaf stages. Younger leaves are more susceptible and infected leaves are commonly seen on the top of the plants. Pods may be infected without any outside symptoms, but the seeds inside are partly or completely encrusted with white mycelia and oospores. 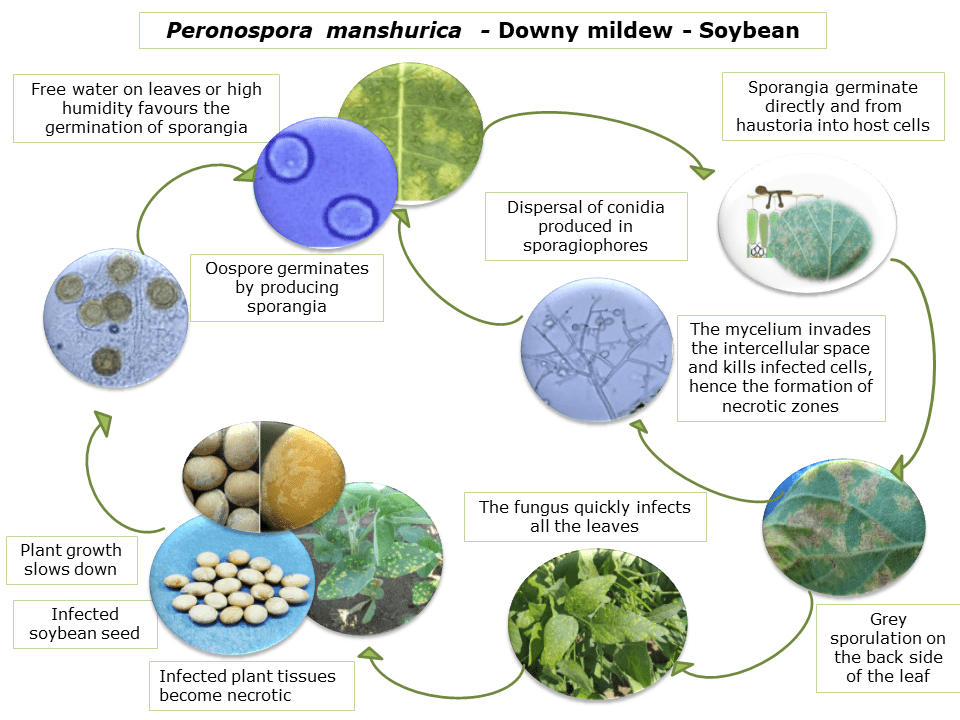 Infested seeds might suffer minor adverse effects during germination. Several experiments at different sites worldwide have investigated the potential yield losses by comparing fungicide-treated and untreated plots. Across those trials, severe disease infestation resulted in yield losses in susceptible cultivars of about 10% in extreme cases. There is also evidence that crop quality from fields which were planted with infested seeds is reduced in terms of seed vitality and protein content.

Downy mildew is currently not a major disease in European soybean crops. This is in most cases due to the relatively small soybean area and due to the short history of soybean production. Incidence is low even in regions with a relatively high proportion of soybean areas (e.g., Eastern Austria). Where it occurs, yield losses are low. However, this may change as the crop expands. The following measures will help preserving this positive situation:

The use of healthy seed is the most important control measure. Seed infection levels can be tested by accredited laboratories and only pathogen-free seed should be used (see also below).

Downy mildew on the front side of leaves.

The Austrian Descriptive Variety List provided by the Austrian Agency for Food Safety (AGES) provides a downy mildew resistance assessment for about 70 common soybean cultivars for growing in Europe.

Generally, there should be at least two years, or better three years, between successive soybean crops in the same field to reduce the risk for disease infection through infested crop residues. This practise helps to manage downy mildew as well as other common soybean diseases unless infested seeds are planted.

Tillage that speeds up the decomposition of infected material reduces the risk of a spread to future crops.

Sowing soybean very early in the season at cool soil temperatures (<9°C) may result in a slow and poor establishment. This weakens the vitality of plants and increases potentially the risk of an attack by pests and diseases.

Cracks in the soybean hull are potential entry points for fungi. Hence, mechanical damages during harvesting and transportation shall be avoided. Most essential are therefore proper harvester settings and gentle conveying applications in the storage.

Fungicide use is rarely economic in case of downy mildew in soybean. Experiences from studies in USA indicate that this disease is better managed through preventive measures (see above). 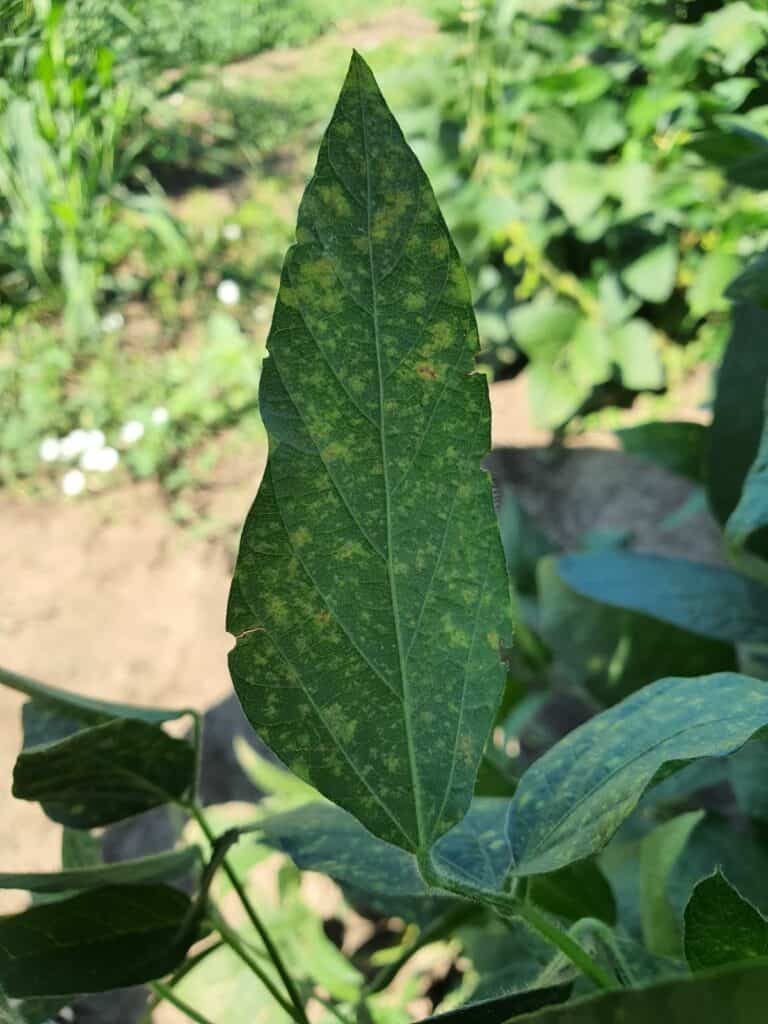 Downy mildew on the back side of the leaf.

The Austrian Agency for Health and Food Safety (AGES) is the responsible body for seed certification to place it on the national and international markets of the European Union, the OECD market and the national seed market of Austria (Institute for seed and propagating material).

As part of the three-year registration procedure, AGES assesses the performance of cultivars in the field in terms of yield, quality and resistance towards diseases and pests. AGES provides the data in the “Austrian Descriptive Variety List” which includes assessment for about 70 registered soybean varieties with a score system from 1 (trait strongly expressed feature) up to 9 (trait is not expressed).

AGES in Vienna and in Novi Sad (Serbia), the Institute of Field and Vegetable Crops provide an analysis of seeds or leaves for Peronospora manshurica. Prices for an analysis may be up to 100 Euro per sample (excl. VAT). One kilogram of seed is needed for this testing procedure. Essential to achieve valid results is that a representative sampling has been conducted.

Therefore, it is recommendable to take the sampling procedures of official seed certifications as a guidance.