Water use and irrigation in soybean

Leopold Rittler, Olha Bykova
Posted: 01.02.2022
Water is the most common yield limiting factor for soybean production in Europe. The occurrence of dry and hot periods in central and eastern Europe has increased in recent years. Timely and efficient irrigation can increase and stabilise yields in areas where summer droughts are common. Efficient irrigation management needs to account for environmental and economic factors. 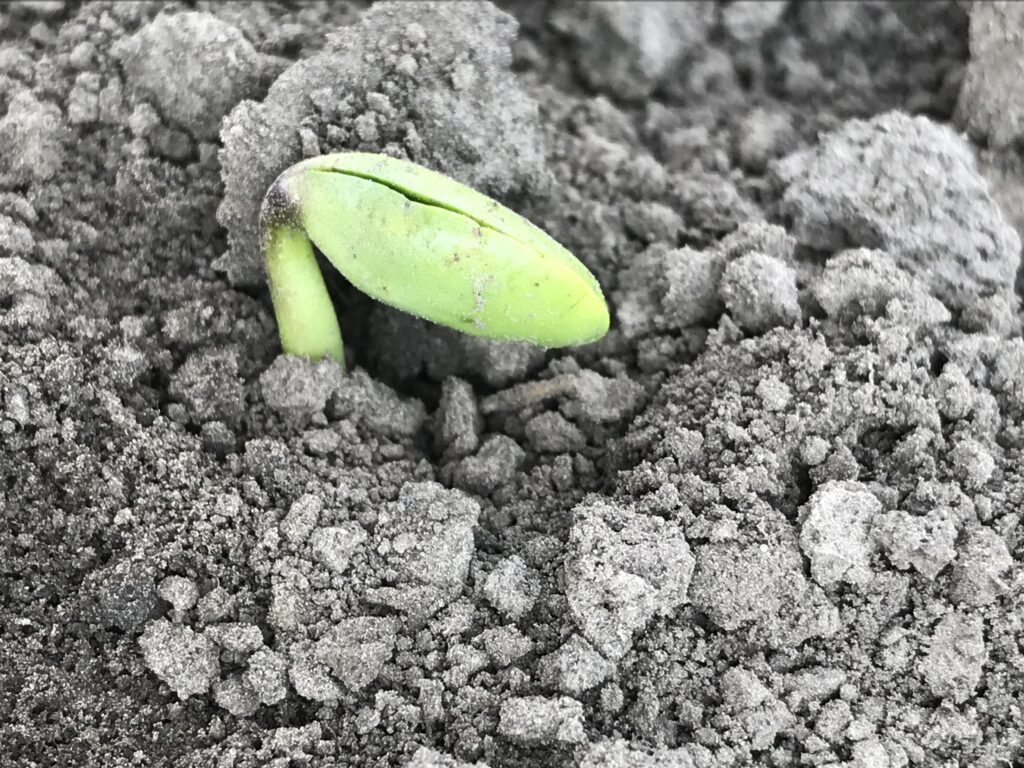 Soybean seeds need imbibe about 50% of their weight in water when germinating.

Soybean uses water efficiently. Depending on weather and soil, it uses 400–700 mm water as rainfall, irrigation or from soil to form a yield of 3 tonnes/ha. Soybean uses 1,300 to 2,300 tonnes of water per tonne of soybean produced. This is comparable with sunflower and lower than rapeseed. The rate of water use changes as the crop develops. Soybean seeds absorb about 50% of their weight in water when germinating, so moisture in the upper soil layers is essential. Rolling a freshly sown field under dry conditions helps to improve seed-soil contact and the supply of soil water to the seed. The crop needs about 1.2–2.5 mm of water per day during emergence and seedling development. The water moves from the soil to the atmosphere through evaporation from the soil surface and transpiration from the crop canopy. The rate of evapotranspiration depends on the crop canopy’s response to solar radiation, air temperature, relative humidity, and wind. Water usage increases as the canopy develops to about 2.5–5.0 mm per day. The vegetative stages are less sensitive to water shortages than later reproductive growth stages because the crop loses the capacity to compensate for short periods of stress as the crop progresses (Figure 1).

Most water is used by soybeans in the stage of flowering to pod fill when there is a full canopy and a fully developed root system. The crop uses about 5.0–7.5 mm per day at this stage. Water deficit during reproductive stages can result in flower abortion, reduced pod number, reduced seeds per pod and decreased seed size. It has a significant effect on yield. Water consumption declines during the final stages to ripening.

Figure 1. Soybean daily crop water use or evapotranspiration (ET) from a well-watered field. The blue line depicts the expected ET based on historical data, whereas the red line depicts the daily ET of a specific growing season in Nebraska, USA. This site is characterised by a continental climate. Modified, original source: Kranz, W.L, Specht, J.E., 2012.

Severe water stress during the reproductive stages can cause yield decreases of up to 60–70%. Soybean plants react to water deficit by turning the underside of leaves to the sun. The light colour reflects sunlight and decreases transpiration. Prolonged drought stress leads toleaf folding. These responses conserve moisture and protect the crop from heating but also reduce photosynthesis. The plant’s strategy is to conserve moisture during a dry period, protecting the plant until the drought passes when normal growth can resume. 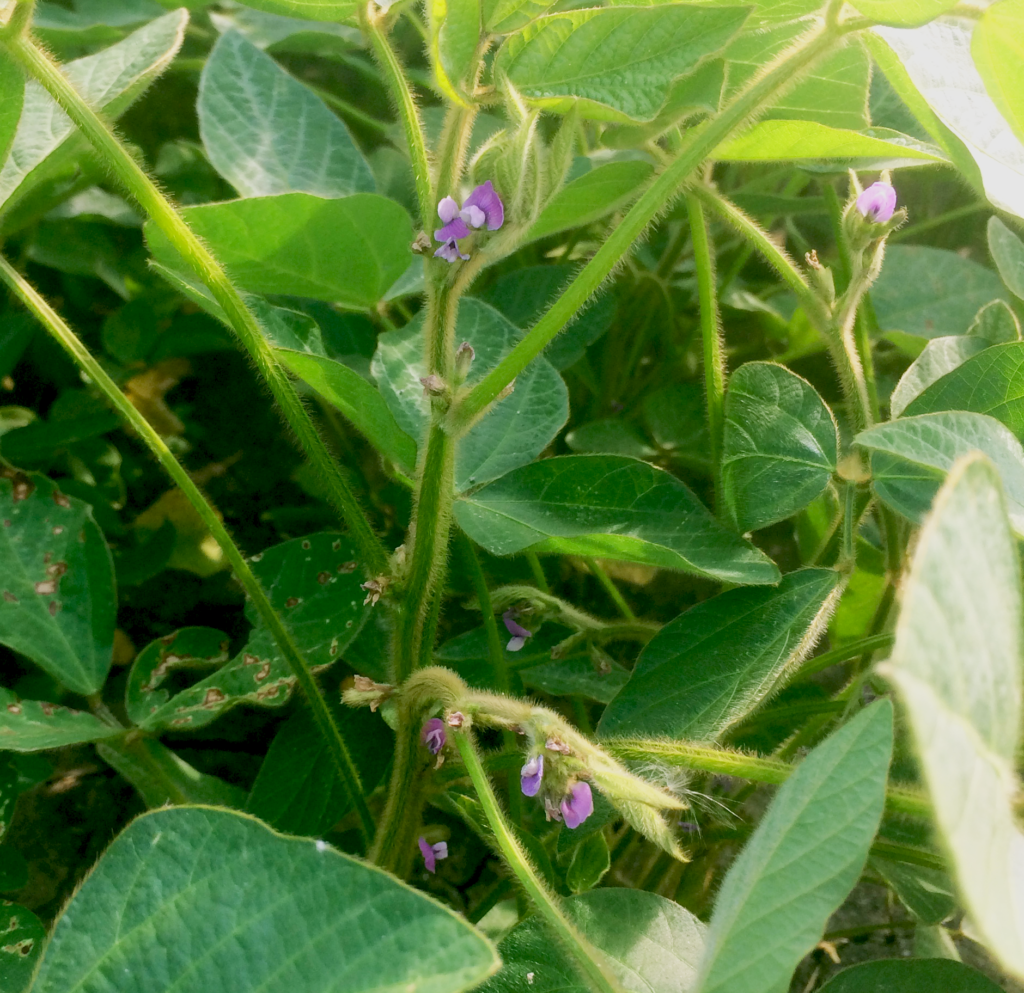 Water deficit during flowering phase can cause abortion of flowers.

Soybean roots can reach 1.5–1.8 m into the soil and use moisture efficiently in well-drained soils without compaction. Soil properties have a great influence on the availability of soil water for plants. The main soil properties that are important for irrigation management are field capacity (FC) and wilting point (WP). Field capacity is the amount of water held in the soil after excess water has drained away and the rate of downward movement has decreased. Wilting point (WP) is defined as the minimum soil water content required to prevent the plant from wilting. The permanent wilting point (PWP) is the level of soil water below which permanent damage is done and the plant cannot recover its turgor if the supply of water is restored. The texture of the soil strongly affects its water- holding and water-conducting capacity. The need for irrigation may be greater on light sandy soils than on soils with a finer structure with a higher clay content (see Table 1). Loamy sands have less plant-available water comparing with clay soils. But soils of heavier texture also hold on to water and have a higher pool of unavailable water. Soil compaction within 1 m of the surface significantly limits deep penetration of soybean roots. Compaction causes a restriction of the main root growth. The root system develops close to the surface. In such conditions, soybean plants are more susceptible to temporary drought stress and relatively short dry periods.

Scheduling irrigation for closing the gap between water demand and supply

Planning irrigation, including the amount of water and timing, takes account of the soil type, the layer to be moistened, and the actual soil moisture content before irrigation.

Assessing soil properties is key to assessing the need for irrigation. Various methods from manual assessment up to automated soil moisture sensors can provide necessary information. Tactile assessment of soil texture is the easiest way. If the soil forms a hand-rolled ball, the soil moisture is adequate. It is recommended to take samples across the field at different depths. The irrigation should begin before any part of the field becomes too dry.

Tensiometers enable the more precise assessment of the need for irrigation. Tensiometer is a sealed, water-filled tube with a vacuum gauge on the upper end and a porous ceramic tip on the lower end. When soil is drying, water moves from the tensiometer along a potential energy gradient to the soil through the saturated porous cup, thereby creating suction sensed by the gauge. It is recommended to install the tensiometer at 20–30 cm deep where the majority of the roots are located. The vacuum gauge reading of 50–60 centibars on silt loam and clay soils and 40-50 centibars on sandier soils is a signal to begin irrigation.

The difference between the water content of the soil at the PWP and FC is the quantity of water available to the crop. This fluctuates as the crop grows due to uptake, rainfall etc. It increases due to precipitation and irrigation and decreases due to evapotranspiration. Depletion of 30–60% of available water is considered as “management allowable” depletion. The best conditions for soybean growth and high yields are where available water content in 0.5–0.7 m soil depth remains above 65% of maximum available water during vegetative phases, above 70% at flowering, and 70–75% during pod filling stages. The practical experience shows that irrigation becomes a viable option when available water capacity is between 45 and 65% of the full capacity. The response to irrigation declines as the pods develop. The response after the seeds have fully formed (when they touch each other in the pod) is small and irrigation at this stage can interfere with ripening and crop drying for harvest. 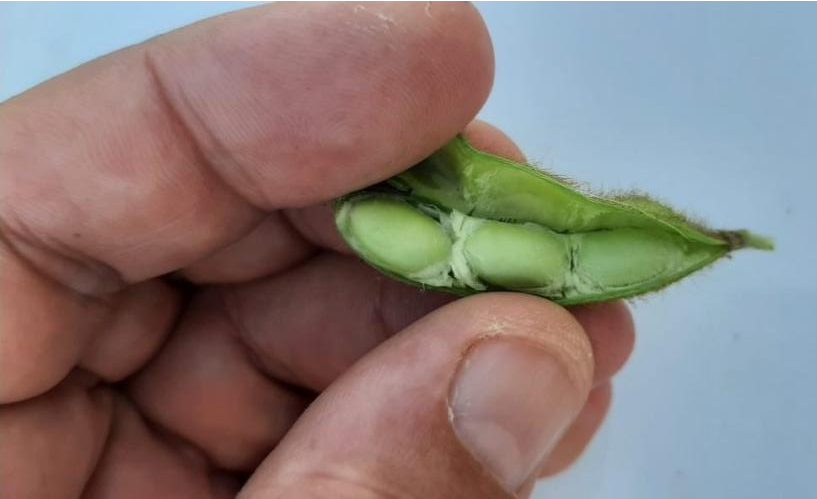 It is recommended to stop irrigation when 50% and more have well developed seeds (seeds that touch each other in a bean).

The overall aim of irrigation is to maintain a water supply at a depth of 0.5–0.7 m. Water evaporates from the surface after each irrigation. Less frequent irrigation with larger amounts reduces the loss of non-productive water. In practice, 30 to 50 mm per application is applied.

Knowledge about chemical properties of irrigation water is essential in irrigated crop production as they can be a constraint. The total concentration of salts is a practical and common measure to assess the applicability of a water source for an irrigation use. Water sources with a high salt concentration can potentially have negative effects on soil and plant health and should be avoided, see Table 2.

For an economic and environmentally-friendly irrigation, soil and climate site conditions should be taken into account:

A combination of high wind speed and low air humidity (<30%) can reinforce the effect of high temperatures and the solar radiation leading to a high evapotranspiration during irrigation.

Application of irrigation in soybean in Europe

Soybean is not very frequently irrigated in Europe as the majority of the soybean area is located in warm-temperate climate zones of central and eastern Europe with more than 500 mm of mean annual precipitation. These growing regions are outside of the typical dry zones in the Mediterranean countries. Irrigation is occasionally used in soybean cultivation to bridge dry periods where the annual rainfall is around 500–600 mm, especially by seed multipliers. Rainfall is usually sufficient to achieve a competitive yield of 2–3 tonnes per hectare.

Irrigation systems become essential where the average annual precipitation is regularly below 400 mm. Under these conditions, summer droughts are common and have often severe impacts on spring-sown crops like soybean or maize. For example, the average annual precipitation is about 370 mm in the southern steppe zone of Ukraine. Drought periods of more than 30 days occur in combination with high air temperatures and low air humidity. In this zone, about five – seven irrigations of 300–500 m3/ha (30–50 mm/ha) each are needed during the growing period to obtain 4–5 t/ha of soybean yield. 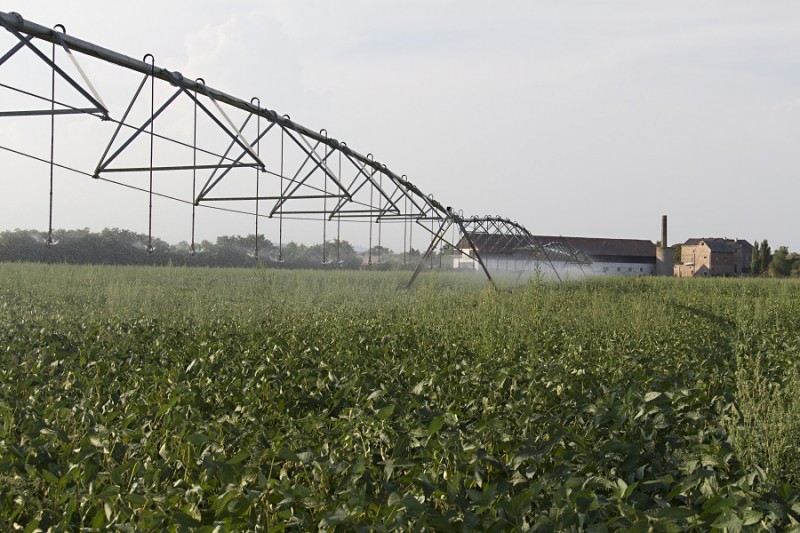 Circular and tubular sprinklers are much gentler, which is immediately noticeable in the increased yield of soybeans. In addition, watering can be optimally dosed.