Jürgen Recknagel, Leopold Rittler, Donal Murphy-Bokern
Posted: 25.10.2021
The choice of cultivar is one of the most important decisions made in growing soybean. Choosing a suitable variety creates the conditions for high added value through high (and reliable) grain yield with adequate quality. Attention to special quality characteristics can attract high prices in specialised markets. Other traits can help reduce production costs. European farmers can choose from a multitude of soybean cultivars. The optimum choice depends especially on latitude, local growth conditions, and the intended market or use. 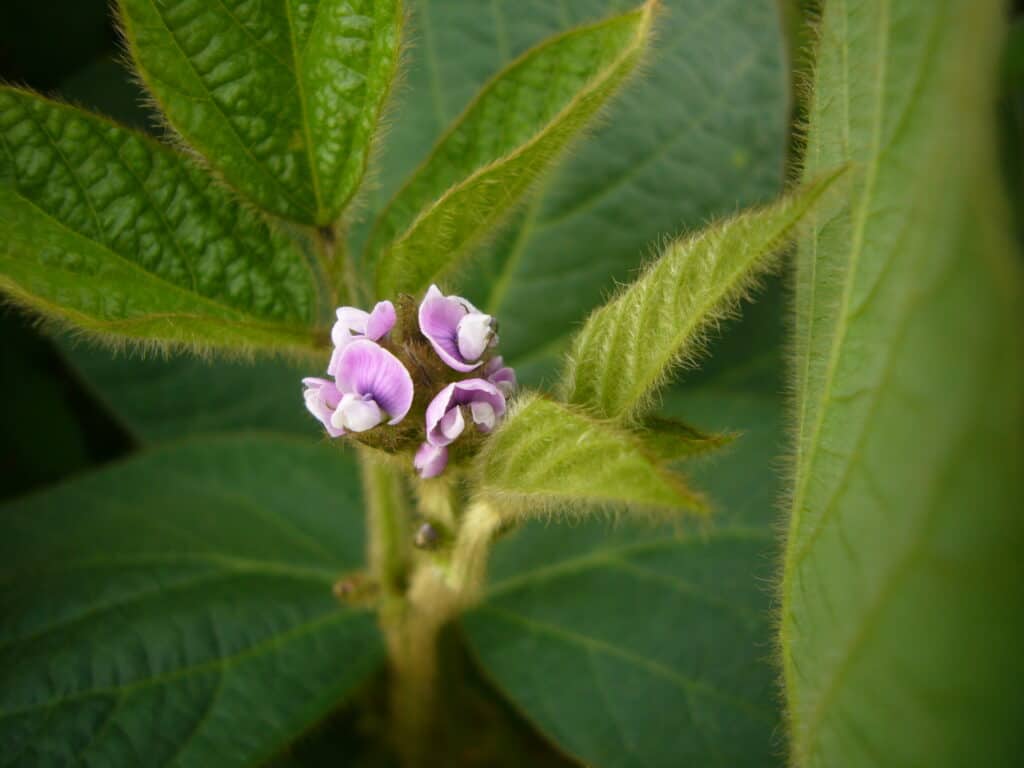 Depending on the autumn conditions of a site, harvesting in September is generally preferred while ripening in October runs risks with weather. The growing season from crop emergence in May is therefore short and cultivars that mature quickly are required in most of Europe. The soybean is by nature a so-called short-day and warm-season plant. From a global perspective, the progress to maturity for a particular site and sowing date is determined largely by the timing of flowering, which in turn is determined by the genetic sensitivity to day length. Flowering is suppressed in the long-day conditions of summer in most of Europe above 45°N unless the cultivar is day-neutral. Day-neutral cultivars have a combination of genes that allow flower initiation under long-day conditions. They initiate flowers as soon as the plant is large enough. The earliest then progress quickly through flower development, flowering, pod filling, and to maturity. Later cultivars develop larger plants and larger crop biomass before initiating flowering. This results in a trade-off between insensitivity to day length (earliness) and yield potential.

After sensitivity to day length, the second factor determining a cultivar’s suitability for a site is how rapidly the crop flowers and matures after flower initiation. Like with maize and sunflower, growth stops completely when temperatures fall to about 7°C. So soybean grows well in areas where other warm season crops such as grain maize and sunflower grow well. Day-neutral cultivars vary in the length of time taken to maturity which is measured as a product of time and temperature above a base temperature. This is the thermal time which is expressed as heat sums.

The categorisation of cultivars into so-called ‘maturity groups’ (MG) provides growers with a rough approximation of the suitability of a cultivar with respect to earliness for a given location. Cultivars are attributed to maturity groups based on in-field observation of new cultivars compared to established cultivars. There are 14 soybean maturity groups ranging from the cultivars that progress most rapidly to maturity (0000) to the latest (X). All cultivars in maturity groups 0, 00, 000 and 0000 are day length neutral and are basically adapted for use above 45° N. This is approximately the whole of Europe north of a line between Royan, Lyon, Venice, Zagreb, Novi Sad, Brasov and the Danube Delta. The 45th parallel is significant because summer day length above this exceeds 15.5 hours presenting a particular challenge to soybean as a short-day plant. 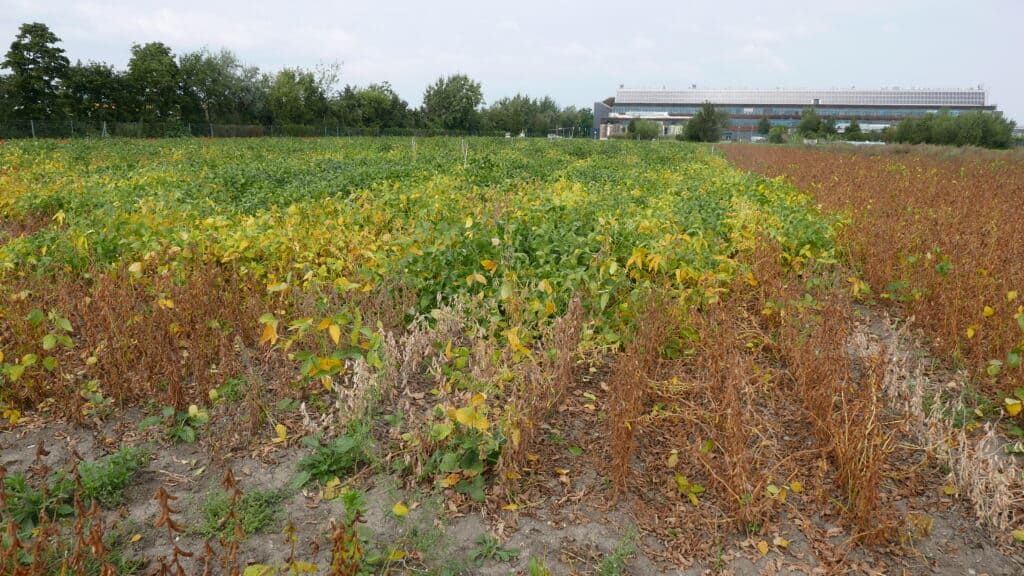 Soybean cultivars of different maturity groups on a research plot at the University of Natural Resources and Life Sciences Vienna.

The MG classification system is not precise but we can say that cultivars of the 000 MG are primarily considered for cultivation in the main soy producing areas in Europe north of the Alps but also in cooler regions south and east of the Alps. The later 00 cultivars usually ripen safely in the traditional warmer winegrowing areas and the lowlands of the Rhine, Neckar, Main, and Danube valleys. Cultivars in 0 MG cultivars only ripen in the warmest areas north of the Alps. MG 0000 cultivars are the earliest and are therefore suitable for northern and maritime areas where cool conditions occur or as a second crop in warmer regions. Due to the trade-off between earliness and biomass accumulation, the yield potential of cultivars declines from the latest (X) to the earliest cultivars (0000). Recent breeding has been particularly effective in raising the yield potential of cultivars classified as MG 000. In practice, the yield difference between 000 and 0000 classified cultivars is significant which may lead farmers to prefer cool season legumes in regions with cooler climates.

In warmer climates of southern and south-eastern Europe, cultivars categorised as in MG I and II with a higher yield potential may be cultivated. Second cropping using earlier cultivars (00, 000) is also practised in some warm areas where soybean may be sown after the harvest of winter cereals in June or early July, if water is available. 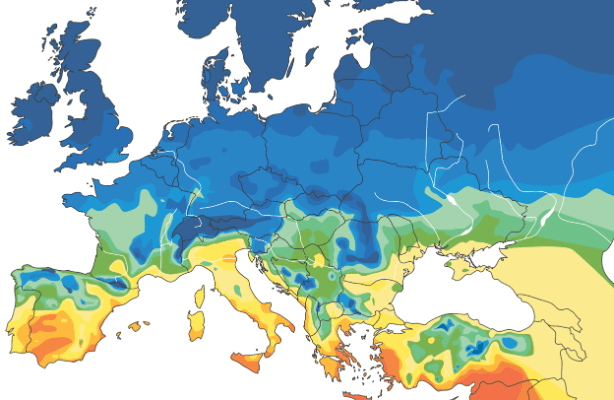 Agro-climatic zones in Europe. The areas with different shades of green and the two lighter shades of blue are suitable for soybean production.

Because the maturity group categorisation is only approximate, some descriptive cultivar lists (Table 1) go further and indicate a number of more or fewer days for maturity compared to a cultivar serving as a reference. This is done in Switzerland, Czechia, France, Hungary and Poland. Description lists in Austria and Germany provide numbers to distinguish between relatively early, medium and late cultivars within a maturity group. In Austria, earliness ratings 2-3-4 are allocated to MG 000 and 5-6-7 to MG 00. These more precise ratings consider the impact of the local effects of temperature and water supply on earliness. Local testing of candidate cultivars to examine these fine responses helps in local selection.

Ministry of Agriculture, Forestry and Water Economy of the Republic of Serbia (Serbia)

The second selection criterion is the standing stability or the resistance to lodging. This currently varies from grade 2 to 9 (with 1 = lodging very low to 9 = lodging very high) in the Austrian catalogue. Four grades are used in France (very low risk, low risk, pretty risky, high risk). The risk of lodging is increased by lush growth enabled by a good supply of water. Therefore, cultivars that stand well are preferred where lush, vigorous growth is expected. As a trait, standing ability is often linked to determinate development that shortens the flowering period which in turn reduces the length of the growing period. This leads to early ripening which may in dry years mean a yield disadvantage compared to indeterminate variety types. Crop height is not decisive for resistance to lodging. Tall cultivars tend to have fewer pods placed close to the soil. This results in lower harvest losses, especially where a flexible cutterbar is not used. 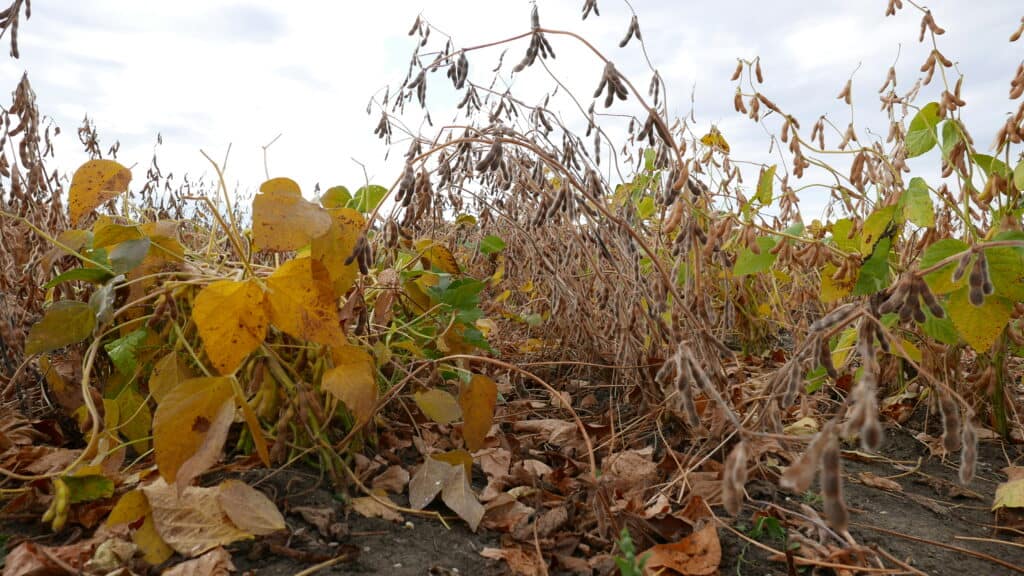 Soybean cultivars with different levels of resistance to lodging on a research plot at the University of Natural Resources and Life Sciences Vienna.

Cultivars with high levels of resistance to sclerotinia stem rot should be preferred where the risk of this disease is high due to a specific microclimate or an increased proportion of susceptible species in the crop rotation (inter alia sunflower, oilseed rape, tobacco, vegetables).

Rapid and vigorous early growth helps achieve early canopy cover suppressing weeds and reducing the risk of erosion. The current cultivars range from 5 to 9 on a 1 to 9 scale (with 1 = slow and 9 = fast). Cultivars with higher values are particularly useful in organic systems where the vigorous growth is valued for controlling weeds.

Forming protein is more demanding for the plant than carbohydrate formation. Therefore, as in wheat, there is a negative correlation between total grain yield and protein concentration in the grain. The optimum for the grower depends on crop trading arrangements. Achieving a minimum protein content may be critical where there are price deductions and supplements around a threshold, especially if the deductions below the threshold are greater than the supplements above it. To help, cultivars are characterised for expected protein concentration on a 2 to 9 point scale (9 being high). No cultivars with a protein concentration shown to be below the threshold in local tests should be selected were protein content is a marketing criterion. In the case of cultivation for on-farm use, protein yield per hectare may be a useful selection criterion. Since soybean oil is not well rewarded by the market and since high oil contents are not beneficial in feed, a high oil content may be rather a negative feature unless it is rewarded by an oil mill.

The use of a range of cultivars spreads some agronomic risks. However, each cultivar should exceed a minimum area to ensure an economically viable marketing where cultivar choice is a marketing criterion. Using several cultivars that differ in earliness helps spread workloads at sowing and harvest. These will also be at different development stages if stress conditions impact on the crop.

Role of buyers and further use

Depending on the product, specific quality requirements are common when growing soybean for food production. Food manufacturers that use soybean directly (e.g., for tofu or milks) often have specific cultivar requirements. This reduces the cultivar options for these uses from the outset. Cultivar-related criteria are rarely a factor in marketing for animal feed (apart from its effect on protein concentration). Other cultivars are available for very special uses such as the production of edamame or natto with very specific qualities where low yields are accepted. Other characteristics such as seed weight (thousand grain weight), flower or navel colour are generally of no significance for cultivation or sale, unless otherwise contractually agreed in individual cases.

The role of seed quality 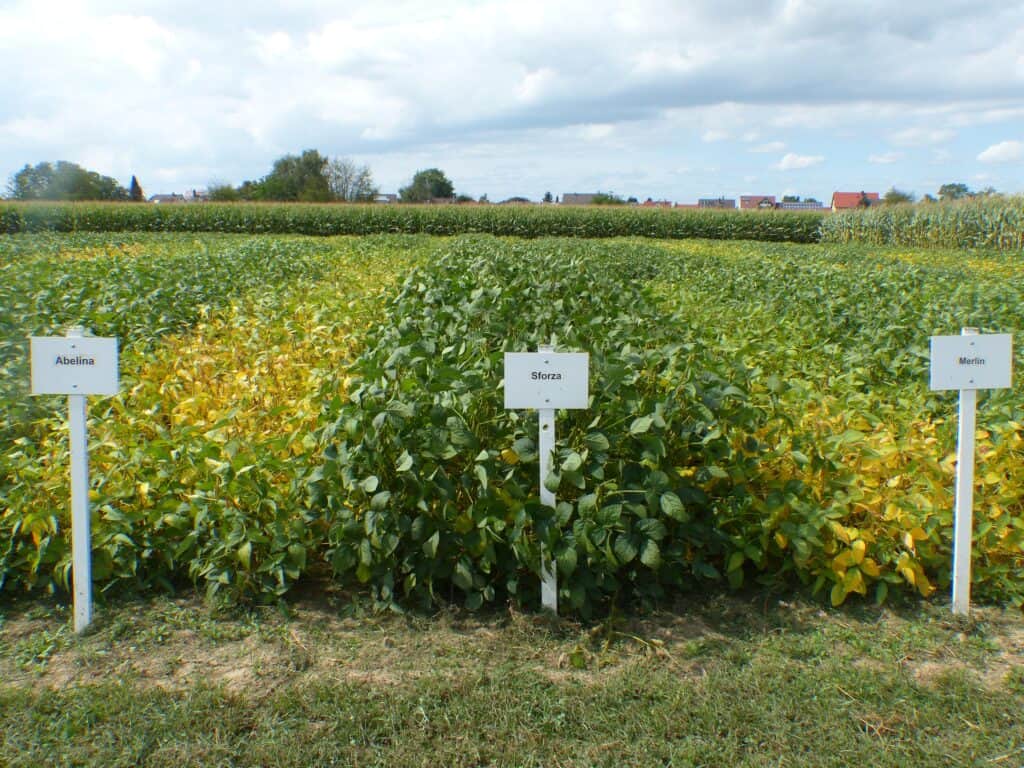 The production and sale of seed is regulated in the EU to ensure that traded seed meets minimum standards of cultivar purity and quality. Farmers have access to a wide range of cultivars listed in the EU common catalogue of varieties which can be marketed in the EU. Seed of other cultivars can be purchased outside the EU for own use only using an importation license obtained from the national authority in charge of authorisation of seed. It is important to realise that the use of seed imported from countries where genetically modified crops are grown (e.g., from Canada or Ukraine) risks introducing traces of genetically modified seed which can cause serious trouble.

Official descriptions and tests of cultivars in Europe

Numerous new cultivars appear on the market every year after proving their performance in tests of official institutions and commercial organisations. Their properties are listed in ‘descriptive variety lists’. These lists provide basic information to help growers select well-suited cultivars. In addition, the results of regional field tests are published every year in many parts of Europe. They are of special relevance to farmers in the respective regions and must be interpreted according to the local weather conditions in each year. Relative performance is subject to annual variation and so results over several years should be used, if available. These results are normally published by the regional agricultural development services. A selection is available on www.sojafoerderring.de.