Philipp Roth
Posted: 26.12.2021
Fungal diseases are important contributors to the relatively large yield fluctuations in faba bean cultivation in central and northern Europe. In particular, rust (caused by Uromyces viciae fabae) and chocolate spot disease (caused by Botrytis fabae) can cause significant yield reductions. Both diseases reduce the photosynthetically active crop canopy by attacking the leaves. This results in a reduced formation of assimilates, which in turn reduces the formation of seeds and thus the generation of crop yield. Early death of the entire plant can occur in severe cases. In addition, chocolate spot can cause sudden loss of flowers and young pods presenting a very significant risk to yield. Several other pathogenic fungi cause diseases on faba bean, but these two are the most widespread on spring-sown crops where they often occur together. This practice note describes the conditions for a high incidence of these two diseases and provides guidance on how to prevent the diseases. It considers the circumstances that make chemical control appropriate. 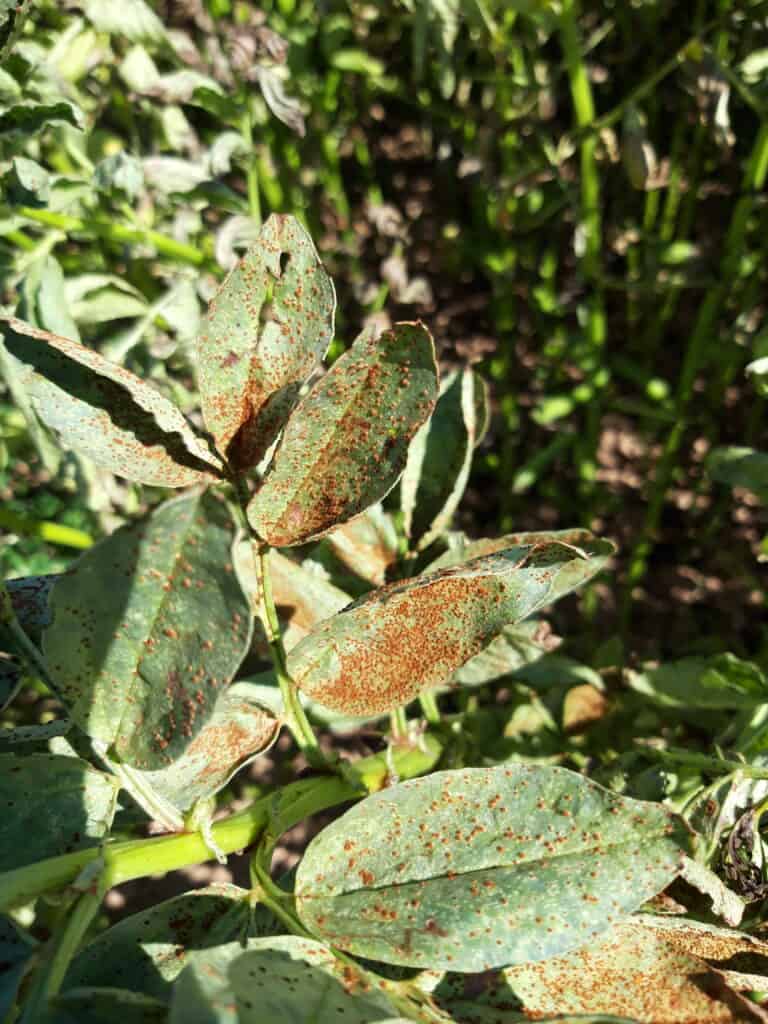 A better understanding of these diseases in faba bean enables growers to obtain higher yields through the targeted use of fungicides. Yields are more secure and unnecessary prophylactic fungicide measures can be avoided. This protects the environment and helps preserve the effectiveness of the few available active substances.

Faba bean rust is more prevalent in warmer areas of central Europe or in warm summers. Infections usually occur at the middle to end of the flowering period. The disease survives on crop residues, winter emerged plants, other host plants and, to some extent, on seed. The spores are spread by wind.

Chocolate spot occurs mainly in regions or years with high rainfall during the summer months shortly before and during the flowering of faba beans. Sclerotia are formed and carry the disease from year to year on crop debris in the soil. The spread within the crop takes place via spores that can travel over long distances.

Towards the end of flowering, scattered 0.5 to 1 mm large, orange rust pustules (uredimia) form on the upper and lower sides of the leaves, and on petioles and stems. Later, dark brown to black spots to 2 mm in size appear. Depending on the time and the degree of infestation, the development of the plant can be disrupted. Early infection may cause leaf fall.

The disease starts with small chocolate-coloured, splash-like round spots scattered irregularly on the lowest leaves. These spots are usually sharply demarcated by a reddish or grey-greenish margin. In severe advanced infection, the lesions grow, converge and darken. This all reduces the interception of light by the crop canopy. Infection at flowering can cause loss of flowers and young pods. Disease at this time can be particularly damaging as it impacts on both the canopy as the source of assimilate and the pods as the sink that forms yield.

The spores require warmth for germination (optimum 20–25°C) which is why the disease usually only occurs in summer. Approximately 6–18 hours of leaf moisture from dew or rain are sufficient for this. Cooler nights with resulting high relative humidity favour the infection. Dense stands, late sowings, and sudden temperature rises with heat stress increase the risk of infection.

The occurrence of the disease is linked to humid conditions for several days. The optimum temperature for infectious spore germination is between 15–20°C with a relative humidity of at least 85–90%. The fungus needs at least 70% relative humidity and temperatures below 28°C for several days for the transition to a more aggressive phase leading to further spread within the crop (lesion growth). When the weather is favourable, a second spore generation can be formed 4–5 days after the initial infection. This can cause a second wave of infection in the stand. Chocolate spot disease is promoted by conditions that inhibit drying of the stands. These include heavy weed infestation, high plant densities, and locations sheltered from drying winds. In addition, poor plant vitality, caused for example by nutrient deficiency, soil compaction or viral diseases, reduces the tolerance of the disease. 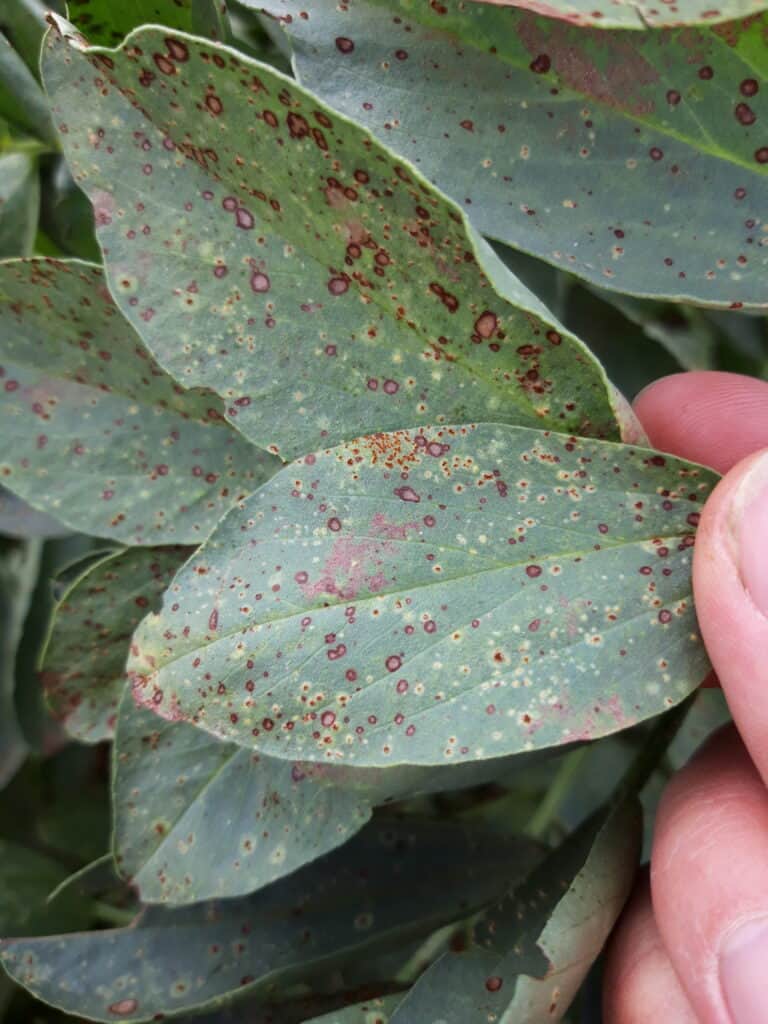 Rare severe uncontrolled infection of chocolate spot can cause total loss of the crop. In less exceptional circumstances, yield loss can reach 50% where conditions favour disease spread during and shortly after flowering. However, outbreaks of rust or chocolate spot in the late grain filling stage are unlikely to significantly reduce yield. Infections after flowering can still have an effect on yields, but chemical control at this time is economical only in the case of very heavy infestation. Infections during flowering pose the greatest risk to yield. Intervention with fungicides is justified from an economic viewpoint if the disease is present at the start of flowering and the weather is favourable for its spread. The difficulty of spraying tall crops after flowering without causing a lot of physical damage limits later control.

Several preventive measures can be taken to reduce the risk of disease and the need for direct intervention. These include growing faba bean no more frequently than one year in six, using seed from healthy crops, and using resistant cultivars. Further preventive measures include the incorporation of crop
residues into the soil soon after harvest, maintaining a spatial distance from the previous year‘s cropped areas, early sowing (for spring-sown crops), and effective weed control as well as establishing the optimum plant density.

Tebuconazole and azoxystrobin are approved for use to control rust and chocolate spot in faba bean in Germany. Tebuconazole is transported with the xylem water flow into the canopy. However, this also results in a dilution effect over time and is therefore active between 7 and 10 days. Tebuconazole has curative properties, especially in rust control, as it attacks the fungal mycelium.

Azoxystrobin is systemic within the leaf and protects the plant by inhibiting spore germination. It must therefore be applied before the main infection event, but the effect lasts a relatively long time (up to 20 days).

A combination of both active substances may be appropriate to use both modes of action. Repeated treatment may be required where the yield potential and disease risk is particularly high. Chemical treatment is particularly relevant when: 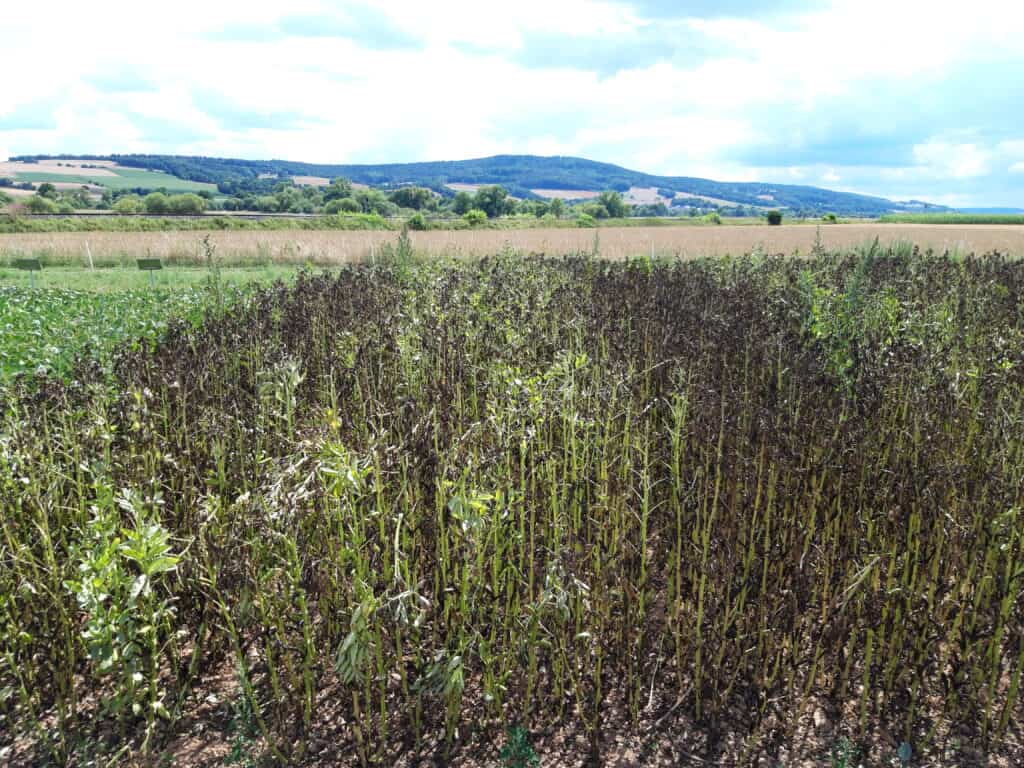 A crop infected with uncontrolled chocolate spot and rust.