Paul Hargreaves, Lorna MacPherson, Jennifer Flockhart
Posted: 28.06.2021
This note supports strategies for effective lucerne (Medicago sativa L.) production in cool regions. While it is particularly based on experience gained in environments normally regarded as marginal for lucerne production, it is relevant to all lucerne-growing situations. The aim is maximisation of crop yield and forage quality. 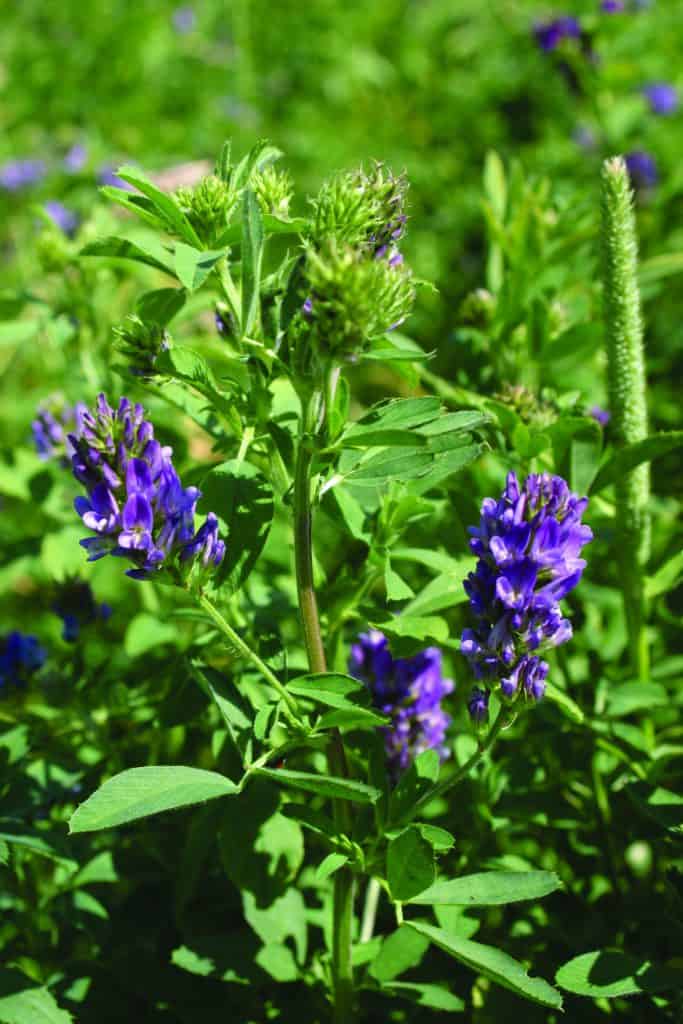 Lucerne at the flowering stage.

Successful production of lucerne delivers high yields of protein without the use of fertiliser nitrogen. With care, it can be grown successfully in cool, temperate, oceanic climates when attention is given to establishment and management of the crop (See Lucerne in north-western Europe). Lucerne provides a valuable forage.

Plant breeders have adapted lucerne to grow in a range of climates. Cultivars vary in the levels of winter activity or dormancy. There are two main types grown in Europe: the Provence or southern types which grow more prolifically, and the Flemish or northern types which are more winter hardy with a more intense winter dormancy.

Being a legume, lucerne fixes nitrogen (N) through bacteria (rhizobium) in nodules on the roots. To ensure good nodule formation, the seed can be inoculated with rhizobium before being drilled (See Inoculation of soybean seed for how this is done for soybeans).

Lucerne is not competitive in its early stages so it is usually grown as a monoculture. It is essential to control broad-leaved weeds, especially during establishment when the young plants are vulnerable to shading from weeds. There is a limited range of herbicides available for weed control and professional support should be sought from suppliers. A herbicide-free solution is to grow lucerne in a mixture with low-growing grasses such as meadow fescue (Festuca pratensis) and timothy (Phleumpratensis) if the aim is to maximise lucerne production. Taller grasses such as cocksfoot (Dactylis glomerata) can be used if a grass- lucerne mixture is required. The grasses help control weeds, especially at the establishment phase. Lucerne can also be under-sown with spring cereals that are harvested as a forage crop. The use of short-straw cereals sown at about half the normal seed rate helps the establishment of lucerne when under-sown.

As the bacteria in the root nodules fix atmospheric nitrogen, little fertiliser nitrogen should be applied (only up to 30 kg/ha during establishment). Keeping soil mineral nitrogen low encourages nodule production and activity. Lucerne has a high demand for phosphorous (P) and potassium (K) fertiliser and the required application will depend on the soil index (as shown in table 1).

Limiting slurry applications (up to 30 kg N/ha) after the last cut balances the provision of P and K with the avoidance of over-supplying N. This slurry replaces some of the P and K taken off in the crop and can improve dry matter yields.

The crop requires a minimum period of undisturbed stem growth and root development in the first year of establishment. For this, the first cutting should take place after flowering, as the plants need to build up root reserves for the next regrowth. Each re-growth after cutting draws on the root reserves. The last cut must take place up to mid-September, six weeks before the estimated end of the growing period (end of October).

There is a trade-off between crop yield, forage quality (esp. digestibility) and persistence. In practice, the optimum time to cut lucerne for quantity, quality and persistence is when 5–10% of the plants are flowering (early flowering). Harvesting practice has a big effect on crop persistence because the crown of the plant is the source of regrowth. The crop should not be cut lower than 7 cm from the soil surface. A spring-sown crop will be ready for its first cut in late July of the first year.

Most of the protein (70%) and minerals (90%) are in the leaf so the aim of the harvesting technique is to recover as much of the leaf material as possible. Roller-type mower conditioners cut and condition the lucerne by crimping or crushing the stem when harvesting. This enhances the rate of moisture loss from the stem without extensive damage to the leaf. Leaf shatter will occur if the cut lucerne dries out too much. Lucerne silage can be clamped or baled. 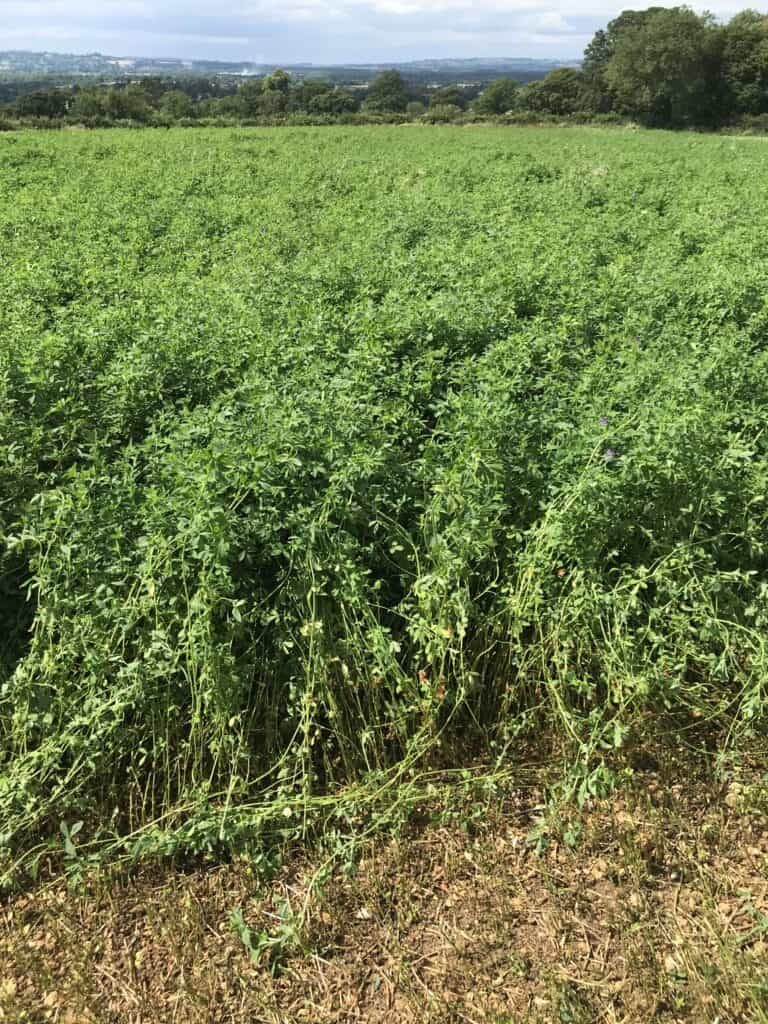