Anelia Iantcheva, Viliana Vasileva
Posted: 02.07.2021
Favorable climatic conditions and suitable soils support the cultivation of grain pea for livestock feed in south-east Europe. Grain pea (Pisum sativum ssp. sativum L.) is very plastic. This means it adjusts to conditions while growing. It is able to enrich the soil with nitrogen, which makes the crop attractive to farmers. Pea provides a valuable plant protein that can reduce the use of imported protein in livestock feeding. The crop is cultivated for dual purposes in Bulgaria: firstly as forage, which is harvested green, and secondly for grain. The crop is rotated to exploit its fertility-raising features. Spring-sown pea in Bulgaria has a short period of rapid vegetative growth in the months of April and May. This is followed by grain development in May and June. Favorable growing conditions and the availability of water from the soil are key to the yield potential generated in spring and early summer.

Spring pea for grain in the region of Pleven, North Bulgaria.

The information set out here helps the development of the pea crop in Bulgaria providing an example for the wider south-east Europe region. Pea is a crop with high plasticity which helps it to overcome adverse weather conditions. It uses soil resources very effectively. In addition, it is able to establish a nitrogen-fixing symbiosis with Rhizobium leguminosarum biovar Viciae bacteria to fix up to 150 kg N/ha and to add 45–70 kg N/ha to the soil for the benefit of the following crop. Thus, pea leaves a nitrogen soil reserve for the subsequent cereal crop. Pea is easy to insert into rotations with cereals (e.g., wheat) as pure stand or in mixture with a companion cereal (i.e., triticale, oat, barley). In addition, in a rotation with cereals, pea contributes to breaking the cycle of cereal diseases. It also ripens early giving the possibilities for a second crop later in the year.

Pea has been grown in Bulgaria for centuries. It became a widespread crop in the 19th century, when its cultivation expanded into northern Bulgaria as a fodder crop, and in southern Bulgaria as a vegetable crop. The cultivation of pea for both dry grain and forage became popular in the 20th century. For many years, the efforts of breeders and farmers were concentrated on forage pea grown in mixtures with cereals. Gradually, the area occupied by pea increased and reached 54,000 ha in 1967 and decreased to 10,000 ha in the period of 1975 to 1980. Significant growth of the areas occupied by pea was observed during the period between 1983 and 1988 when it was recognised as a perspective forage crop and the areas reached 150,000 ha. The reform in agriculture, which started in 1989, disrupted proper cultivar maintenance and seed production and caused another decline in production to only 10,000 ha in 1993. Interest of private farmers has increased since 2000 and the area of forage, grain and vegetable pea has recovered to over 50,000. Vegetable pea accounts for about 14% of the area. 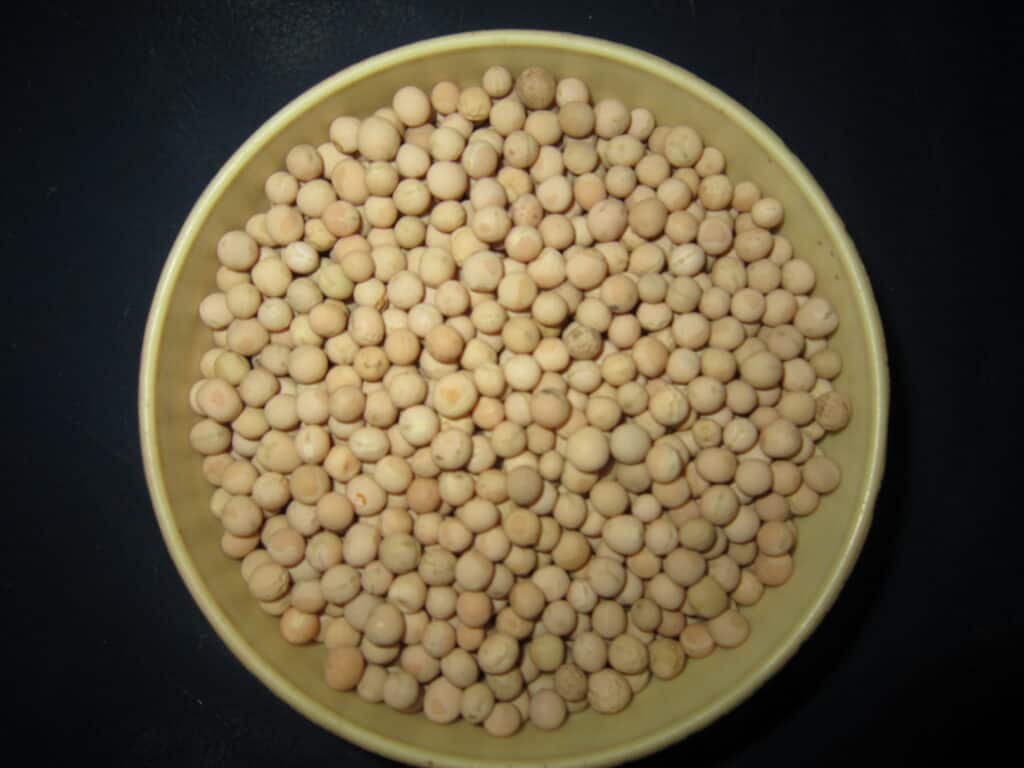 Seeds from spring pea in the region of Pleven, North Bulgaria.

The biological characteristics of pea enable it to be grown as a spring and winter crop (Table 1). “Pleven 4” and “Kerpo” are important Bulgarian forage cultivars for spring sowing. They were bred in the Institute of Forage Crops in Pleven in northern Bulgaria. Two grain cultivars (Mistel and Kristel) were bred in the Dobruzhanski Agricultural Institute, General Toshevo, North Bulgaria. Three grain cultivars (Teddy, Amitie and Picardy) come from the Institute of Plant Genetic Resources, Sadovo, southern Bulgaria. The intensive growth and development of spring pea cultivars occur during the period May-June, when rainfall is sufficient to ensure an intensive crop development without irrigation.

The basic requirement for the preceding crop is to leave the soil clear of weeds. Pea is not compatible with pea and so should not be grown more often than one in five years.

Ploughing followed by conventional tillage is most commonly used and provides the essential compaction-free 30 cm layer. Reduced tillage should be used where severe summer drought is expected. Although adapted to a range of soils, the preferred ones of pea are those aerated, with good water holding capacity, moderate lime content and a pH between 6.5 and 7.5.

The most suitable time for sowing spring pea is February to beginning of March (for some south-east regions it could be end of January to middle of February). Thus, the plants use the accumulated winter moisture and develop a strong root system that makes them more resistant to summer droughts. Delayed sowing reduces yields.

Pea productivity is closely dependent on phosphorus and potassium fertilisation. Moderate amounts of phosphorous (60–80 kg/ha P2 O5) and potassium (40–50 kg/ha K2O) are required. It should be applied with basic tillage in the autumn. Phosphorus fertilisation contributes to a better development of the root system and also increases disease resistance. A small amount of nitrogen (20–30 kg/ha) incorporated during soil tillage before sowing can be useful as a starter in poor soils when the symbiosis with rhizobia is not yet established.

Spring pea is a weak competitor of weeds. For this reason, rapid seedling emergence, adequate crop density, pre- and post-plant tillage, and herbicides help to reduce weed pressure. If appropriate, chemical control of both grass and broadleaf weeds is possible using a range of pre-and post-emergence herbicides. The most economically important pest of crop grown for grain is Bruchus pisi. The successful treatment of this pest is the timely application of insecticide to crops. Economically important diseases are Ascochyta pisi and Erysiphe pisi. Immediate ploughing of crop residues after harvest to avoid spore dispersal from diseased plants is recommended against diseases.

The optimal stage for harvesting for green mass is at the end of flowering/early pod setting, to maximise forage yield and quality. When the harvest time is delayed, dry matter yield can increase, but simultaneously the forage quality declines. Most often the seeds are harvested by direct combining, which is applied when more than 70% of the beans are ripe, in dry weather, but not in the hottest hours of the day. Peas must be harvested as soon as possible. Otherwise, grain losses are significant. After threshing, the grain is dried in the sun, cleaned in high humidity and what will be stored for a long time is fumigated. Seeds should be stored in dry, ventilated rooms.

Spring pea for forage in the region of Pleven, North Bulgaria.

The information provided is the result of studies and observations of authors who are part of the Bulgarian legume network.

Kertikov, Т. and Kertikova, D., 2017. Study on grain yield of spring field pea cultivar Kerpo depending on the technology of cultivation. Journal of Mountain Agriculture on the Balkans, 20(5), 98–106.