Paul Hargreaves, Lorna MacPherson, Jennifer Flockhart
Posted: 24.08.2021
Due to lucerne’s high protein content and the structure of its leaves, attention to detail at harvest is required for best results. This article sets out how yield and nutritional losses are minimised when lucerne is harvested and ensiled for forage. 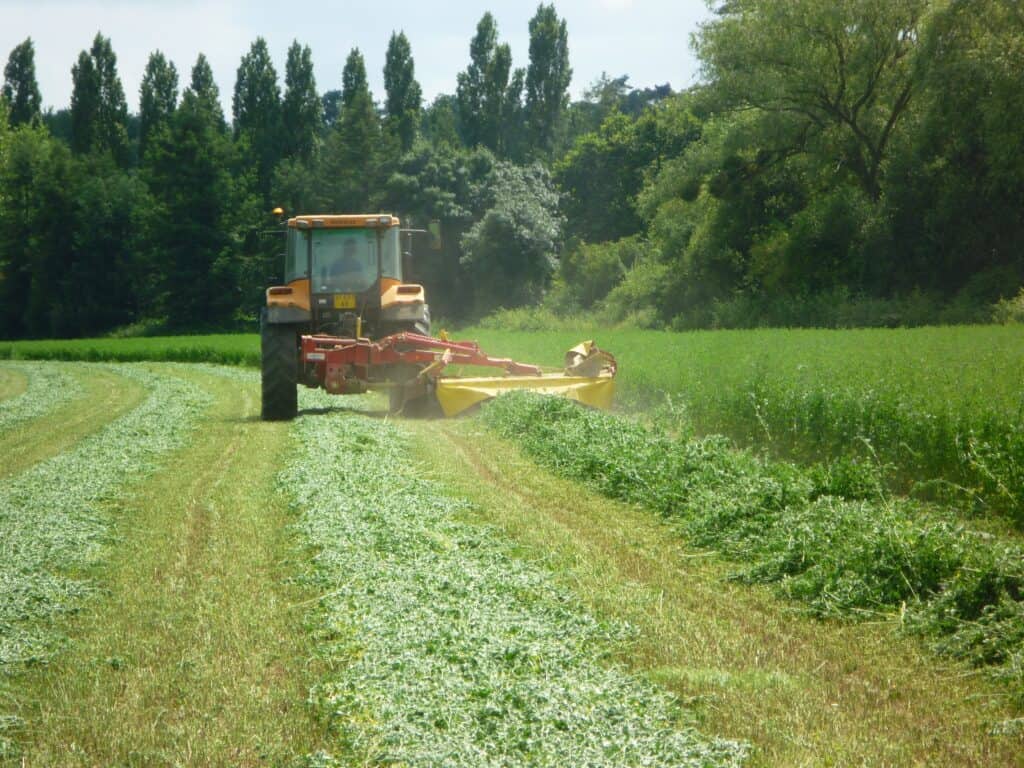 Attention to detail results in a good balance between yield and nutritional quality as affected by the stage of maturity. This also supports crop persistence and helps reduce weed invasion.

Harvesting lucerne is different to harvesting grass in several important respects. The date of harvest is less critical for nutritional quality compared with grass. The digestibility and palatability does not decline after the ideal harvest date as much as in grass. However, the crop’s fragile leaves are susceptible to loss during handling. A lower sugar content compared with ryegrass requires greater attention to achieving
good fermentation.

Good harvest management of this perennial legume is about achieving an optimum balance between harvest yield and allowing the crop to build up root reserves for over-wintering so that the crop persists from year to year. Optimising harvesting means balancing several objectives: harvest yield, nutritional quality, crop persistence and crop health.

For established crops in their second and subsequent years, harvesting at the flower bud stage results in a high protein content. Delaying harvest to the flowering stage results in a higher yield but with a decline in quality. Harvesting when 10 to 30% of the flowers are open is a reasonable compromise between yield and quality. Repeated early cutting (before flowering) affects plant health, reduces persistency and increases weed invasion. There is sufficient build-up of food reserves in the roots for good regrowth and over-wintering by the time the crop starts to flower. As a general rule, a crop should be allowed to reach 50% flowering at least once each year.

Once established, similar to perennial ryegrass, lucerne can be cut a number of times through the growing season, generally from May onwards. In a four cut regime (about late May, early July, mid-August, and October), the first two cuts together account for about 70% of the annual yield while the last cut accounts for only about 10%. October harvesting reduces the root reserves for over-wintering. The decision to harvest in October is critical for allowing the plant to build up root reserves for the winter. Unlike grasses, where the growing point is at the plant base at soil level, lucerne’s growing points are higher up on the stem. Therefore it is important to leave a 7 cm high stubble. In addition to enabling rapid regrowth, this relatively high stubble also aids wilting, drying and crop handling. Avoiding loss of the leaf material is a priority in crop handling because the leaves account for up to 70% of protein. About 90% of the vitamins and minerals are stored in the leaves. Turning and swathing should be done when the crop is damp, for example early in the morning. 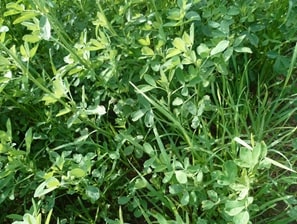 Conserving lucerne requires more attention to detail than grass. The forage can be difficult to ensile due to the lower sugar content. Higher dry matter is needed for clamped silage (around 35%). This reduces the risk of clostridial fermentation and butyric acid production that reduces feed intake, production, and is harmful to general animal health. The use of an additive i.e. acids, molasses or homofermentative bacteria is also essential to promote the lactic acid producing bacteria for effective fermentation. Wilting (partly field-drying) lowers the moisture content and increases the concentration of sugars allowing the silage to stabilise quickly. This reduces the amount of additive needed.

There is a potential for mold spoiling lucerne silage at higher moisture levels, especially in big bale silage. Due to the more fibrous stems, the lucerne is more difficult than grass to compress to exclude the oxygen. Therefore a higher dry matter (40-50%) is needed for baled silage. However, over-wilting with more than 50% dry matter makes compression more difficult. The fibrous stems also require at least four wraps of plastic to prevent them piercing the wrap and allowing oxygen into the bale.

There a number of simple tests that can be used to estimate forage dry matter content. The first is hand squeezing a small ball of lucerne cut into 1–2 cm lengths. The dry matter is about 30–40% when the ball falls apart slowly with no free moisture and little moisture on the hand. When the ball springs apart quickly the dry matter is over 40%. This can also be estimated with a microwave oven.

A large handful is weighed to the nearest gram in a microwavable container and placed in the microwave oven along with a cup of water. The sample is dried in 3 minute intervals at high power until it begins to feel dry, then dried at 30 second intervals with the sample being weighed after every interval. Once the weight of the sample does not change this final weight is recorded. The percent dry weight is calculated from the final dried weight as a percent of the original weight. Lucerne silage takes approximately six weeks, a similar amount of time for grass silage. 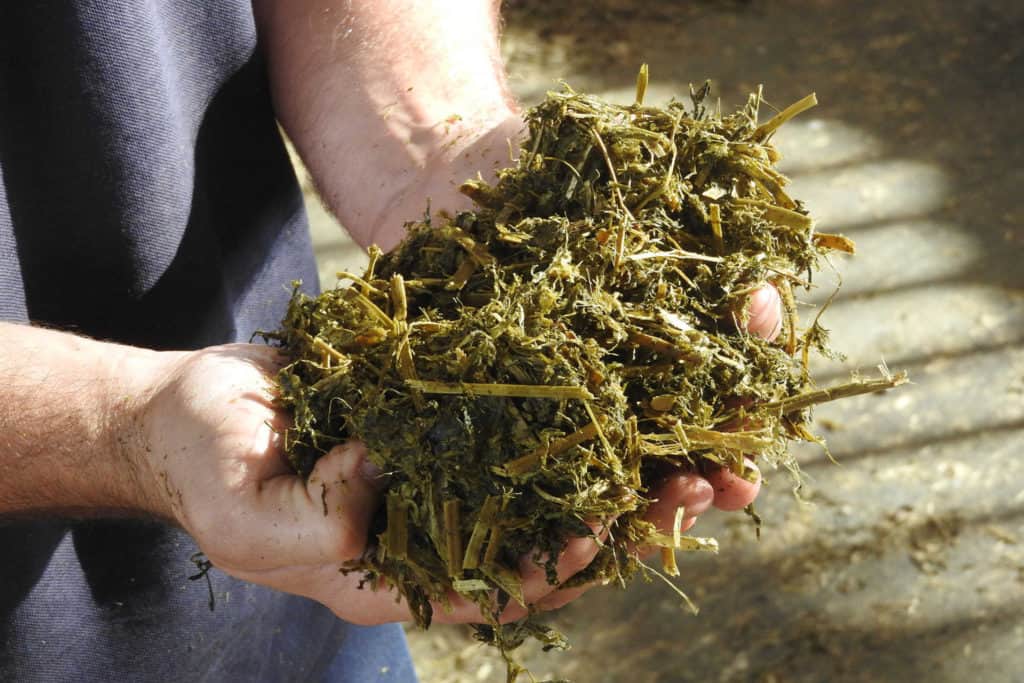 Flockhart, J., 2016. The effect of date of harvest and stage of maturity of lucerne silage on dairy cow performance. Report prepared for DairyCo (AHDB Dairy).