Intercropping of grain pea with cereals

Matthias Klaiss
Posted: 16.07.2021
Pea (Pisum sativum L.) is a valuable crop species containing around 20% crude protein in the seed. Cultivated as a pure crop, pea is prone to lodging and susceptible to biotic and abiotic stress. This is especially the case for the taller cultivars often used for forage. This leads to diminished crop performance and inferior crop quality. This practice note provides insight into intercropping systems of pea and cereals as developed and used in Switzerland. This cropping system was developed over years in an iterative process in cooperation with farmers using farm-based experiments. The cultivation of semi-leafless grain peas mixed with barley and forage peas for grain production intercropped with rye or triticale is a proven approach to pea production and has become a standard way to cultivate grain peas in organic systems in Switzerland. In addition, as a further partner, camelina can be added to pea and barley. 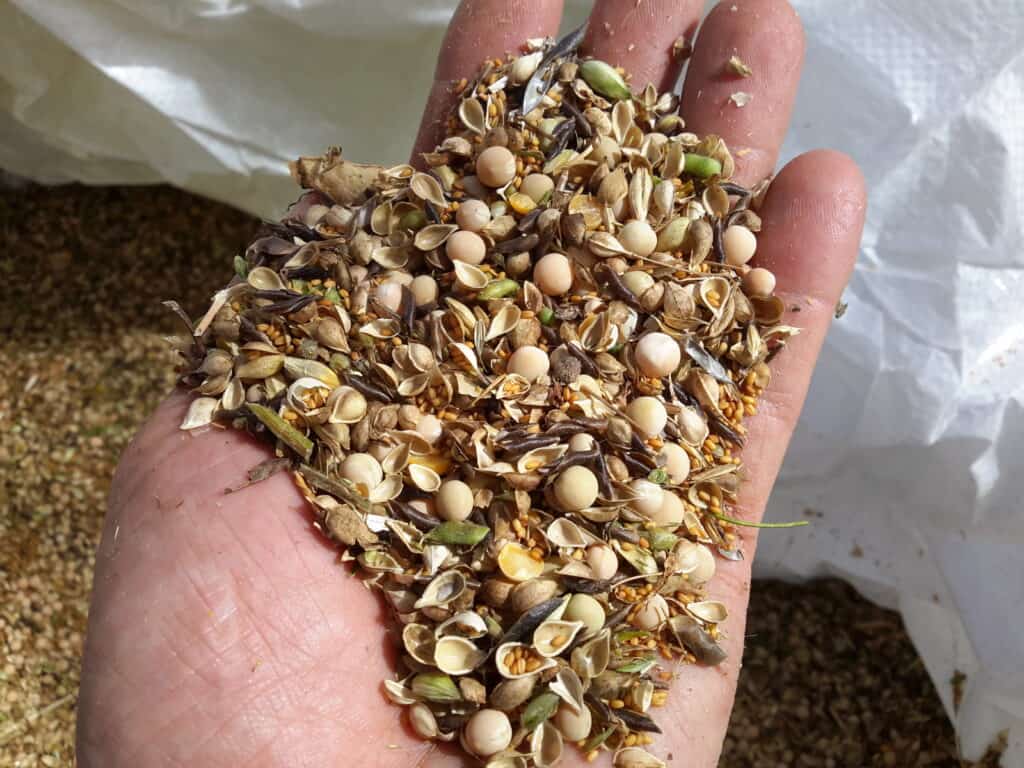 Grain from a crop mixture of short stemmed protein peas, barley and camelina.

Intercrops usually have a higher yield than the average of the same crops grown separately. The information here can help farmers optimise the use of this type of intercropping. These intercrops are resilient and require no nitrogen fertiliser or herbicide applications. The cereal component prevents the pea component from lodging. Intercrops can make a contribution to low input systems in particular.

Steps to successful intercropping of pea and cereals

Cultivar selection: Semi-leafless short-stemmed grain pea and barley are ideal intercropping partners. Experience shows that a seed mixture that combines 80% of the pure stand density for pea and 40% of the pure stand density for the cereal is a good general starting point. This ratio may be adapted to individual experiences with growth patterns of different cultivars. Semi-leafless spring and winter pea cultivars are suitable and possible matching combinations are shown in Table 1.

Long-stemmed pea cultivars are often also used for forage production. Rye or triticale is a suitable partner crop for these tall pea cultivars. The pea component of the seed mixture is lower than with shorter semi-leafless pea due to the strong vegetative growth. A combination of 20–40% of pure stand seed rate for tall pea and 70% of pure stand density for rye/triticale gives good results. No field work is required between sowing and harvest due to the strong growth of the crops.

It is important that the pea and cereal cultivars mature around the same time. Finding the suitable cultivar combination (same maturity) and adapted seed mixing ratios can be accomplished by setting up simple strip trials. 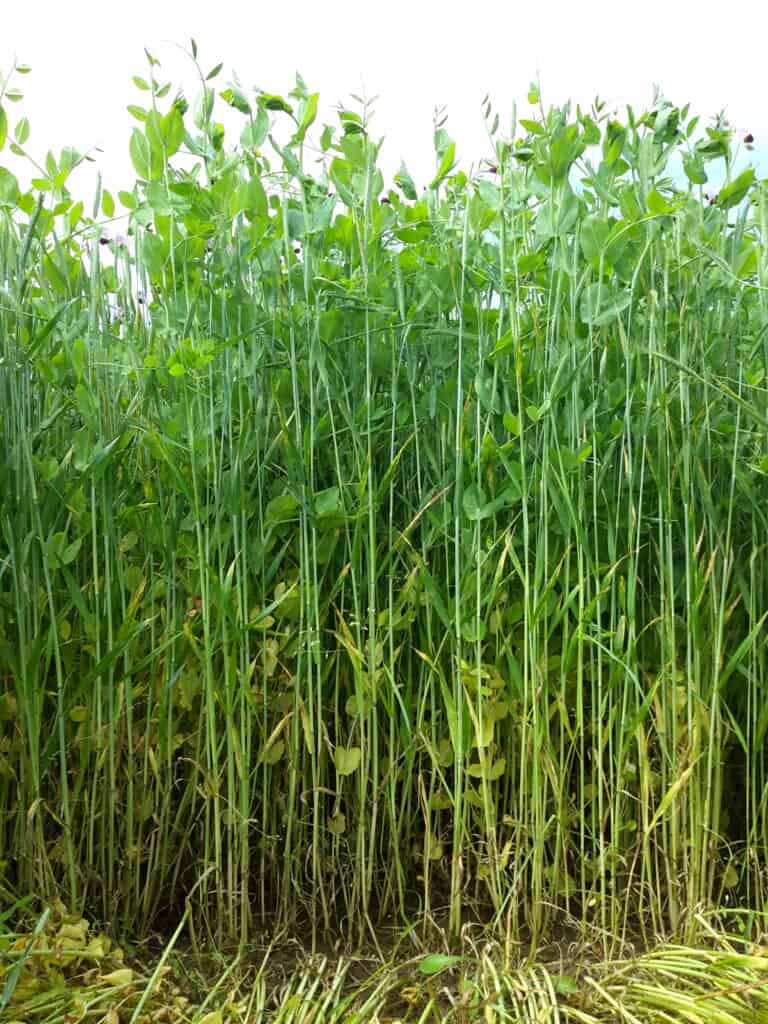 Crop rotation: Producing legumes more frequently than one year in five increases the risk of soil-borne diseases that cause ‘legume fatigue’. A legume-based intercrop must be treated as a pure-stand legume crop in the rotation.

Seedbed preparation: Due to the rapid development of ground cover, these cereal/pea systems are especially suitable for sowing into mulch. Otherwise, pea establishes best in well-consolidated seedbeds. Soil compaction and crust formation on the soil surface reduces plant growth and prevents good development of root nodules that fix nitrogen. Ploughing or other deep loosening may be required for heavy soils. Spring sowing on very heavy soils may require autumn ploughing, otherwise ploughing in February is sufficient. Light cultivation that preserves soil crumb structure reduces the risk of soil crusting. Application of green manure or compost is also possible.

Sowing: We use a simple gravity-fed seed drill as is traditionally used for cereals. The seed must be pre-mixed before filling the drill tank. The homogeneity of the mixture should be checked regularly during sowing. Combine drills (with two tanks) can be used to sow the pea and cereals separately. Typical cereal row spacing is suitable with a sowing depth of 3–4 cm.

Seeding time: Peas/cereals can be sown in autumn or spring at sowing time of the pea. Autumn sowing reduces the impact of spring and summer drought, particularly if pea flowering time occurs before drought hits the crop. This is a drought avoidance strategy and the longer growing season from autumn sowing tends to stabilise yields. The ideal sowing date in autumn is one that produces well established but small plants by winter (3–4 leaf stage).

Spring sowing takes place as early as possible at the beginning of March, so that the crop can use the moisture accumulated during the winter. Pea seedlings tolerate slight frost events around -4°C.

Weed control is usually not needed, but a high weed pressure can be controlled by harrowing in early stages. Tall pea/rye mixtures are particularly competitive and a completely weed-free crop is often achieved.

Fertilisation: No nitrogen fertilisation is needed. Nitrogen fixed by the pea has only a small effect on the cereal. However, the cereal has been reported to stimulate nodulation.

Harvest: The peas are ready to harvest when a fingernail can no longer penetrate the grain at a moisture content of 12–15%. The pods are particularly brittle and susceptible to shatter when the air is dry. Harvesting in the morning and evening, when humidity rises, reduces pod shatter. The optimum combine setting is a compromise between minimising damage to the pea seeds while harvesting as much of the cereal grain as possible. This involves the following considerations for setting the combine harvester: 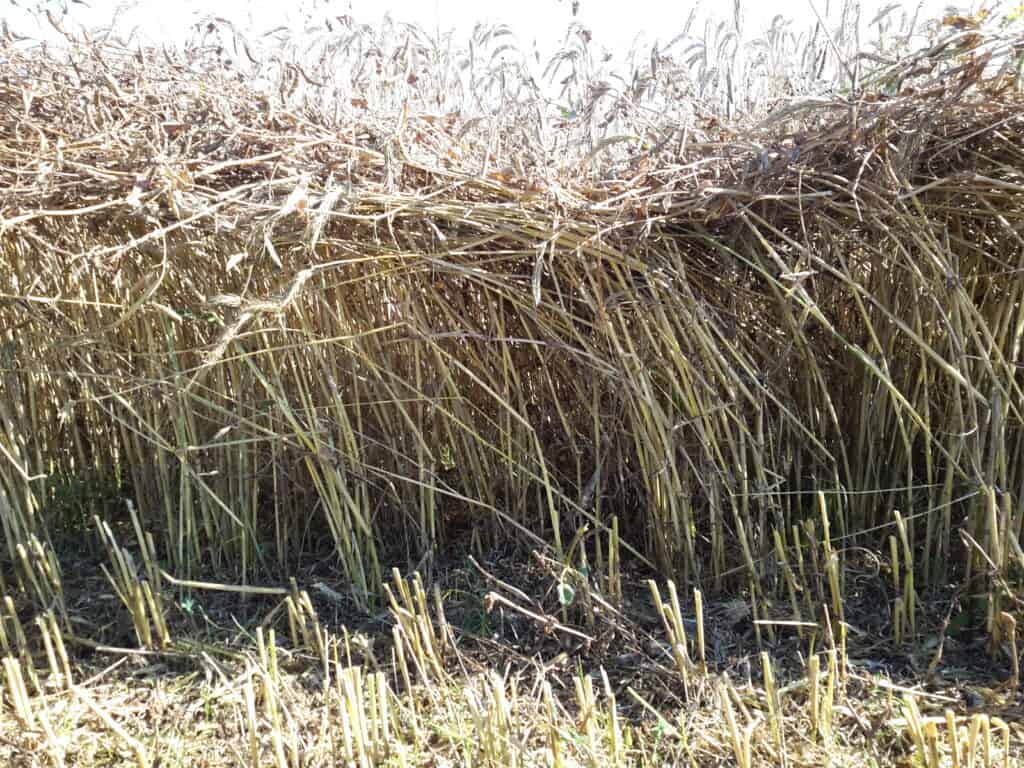 Separation of the grains: A key success factor for adopting intercropping systems is the separation of harvested grains. Grain of pea and cereals are relatively easy to separate. In Switzerland, separating up to 3 components at a time is offered as a service by grain handlers. Separating the harvest allows the components to be used and traded separately. This is important where the grain is not fed on the farm.

Yield: The ratio of grain legumes to cereals in the harvested crop fluctuates for different reasons, depending on how stresses impact on the crop. The proportion of pea in the crop of autumn-sown grain pea mixtures in many trials (from 2009–2015) ranged between 30 and 80%. The crop yield (pea and barley) varied between 3 and 6 t/ha. The yields of mixtures of forage pea and rye ranged between 2.5 and 5.2 t/ ha and the share of peas in the harvest varied between 26 and 80% (Trials 2016 and 2017). 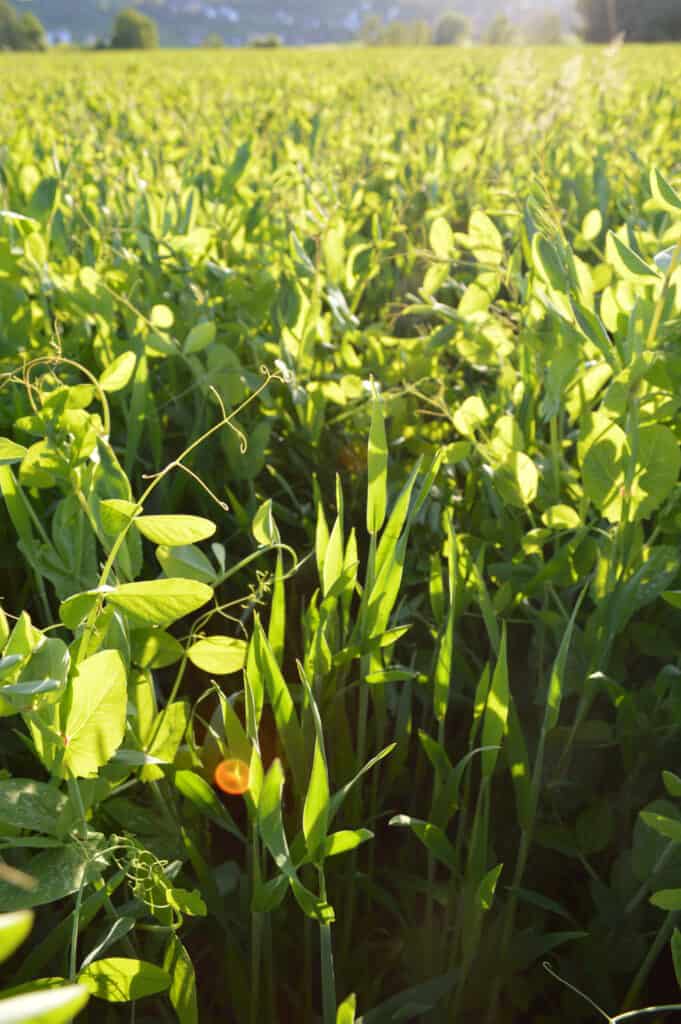 The information presented here is the result of investigations and studies conducted by the Research Institute of Organic Agriculture, FiBL, Switzerland.