Insights from a survey of German farmers
Inka Notz, Moritz Reckling
Posted: 11.04.2022
Lupin is well adapted to a wide range of environmental conditions and produces high yields of protein. Germany is a historically important growing area for lupin but the area and production has fluctuated greatly in recent years. Insights into farmers’ perceptions and strategies reveals potential drivers for changes in lupin production. Results from a unique survey are presented to describe farmers’ decision-making on-farm, their motivations, challenges and suggested changes in lupin production. Direct insights into farmers’ experiences and assessments of lupin cultivation and use in Germany helps us understand the cause of change. 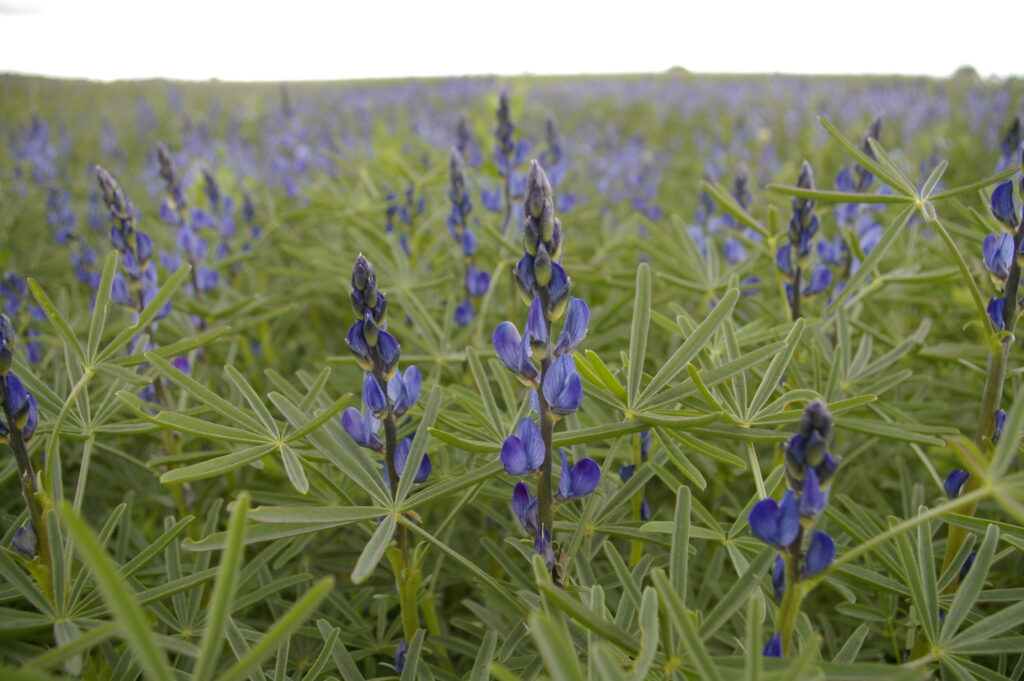 The survey and respondents

An online survey with conventional and organic farmers who cultivated lupin was conducted across Germany within the ‘Demonstration Network for Cultivation and Utilisation of Lupin’ between October and December 2019. In total, 67 farmers responded. Most farmers were from the states Brandenburg, Hesse, North Rhine-Westphalian, Lower Saxony, Bavaria and Saxony-Anhalt with 7-12 responses each. Since lupin is mainly produced on sandy soils with low soil pH in north-eastern Germany, the sample included farmers from this region and also farmers from western and southern areas where lupin production is novel. Conventional farmers were the largest group with a share of 64% (43), 36% (24) were organic farmers.

Lupin production and use

Most of the conventional farmers (80%) reported producing only narrow-leafed lupin (Lupinus angustifolius L.). White lupin (Lupinus albus L.) was grown by 10%. Both species were grown by 7%. Many organic farmers (54%) reported producing only narrow-leafed lupin, while 25% produced white lupin. Both were grown by 13%. Only a very few farmers produced the yellow lupin (Lupinus luteus L.). This distribution reflects the general dominance of narrow-leafed lupin in Germany with 10 registered cultivars in 2022. Due to the disease anthracnose, caused by Colletotrichum lupini (Bondar), white and yellow lupin cropping stopped around 1995, and only the tolerant cultivar of white lupin is now grown (4 registered cultivars in 2022).

The majority (54%) of the conventional farmers produced lupin for on-farm use only while 18% produced lupin as a cash crop only and 28% for both. This split for organic farms was even (32%, 36% and 32%, respectively). Lupin sold from conventional farms was mostly for feed (89%) and less often for food (17%) or seed (11%). Compared to the conventional farmers, more organic famers sold their lupin for food (47%) which reflects the higher market share for organic lupin-based food products e.g., meat replacements, meal, coffee, drinks. The larger share of organic lupin was sold for feed (67%).

The most stated motivation of conventional farmers was to produce domestic protein feed (60%). Steadily increasing soybean prices support this motive. Agronomic motives, such as crop diversification and enhancing crop rotations were cited by 40%. Other motives arise from financial incentives from the Common Agricultural Policy and personal interest in the cultivation of lupin. Some farmers referred to drought tolerance of lupin and benefits for soil fertility as motives to grow the crop.

The main challenges perceived in lupin production were very similar from conventional and organic farmers. Drought is regarded as the greatest challenge by both groups. This is likely to be a consequence of the extreme weather conditions in 2018/2019. Weed infestation, particularly late infestation, is seen as another major challenge. This reflects the poor competitiveness against weeds and the limited options for weed control especially in the late growing phase. Other unfavourable weather conditions were seen as a medium issue by about50% of the conventional as well as organic farmers. More organic farmers (41%) than conventional farmers (16%) perceived anthracnose as a medium or major challenge for lupin cultivation. A similar picture but on a lower level was shown for an infestation risk with the lupin weevil (Sitona gressorius F. and Sitona griseus F.) – 24% of organic farmers named it as a challenge and 15% of conventional farmers. Other pests and diseases were only seen as a challenge by individual farmers. 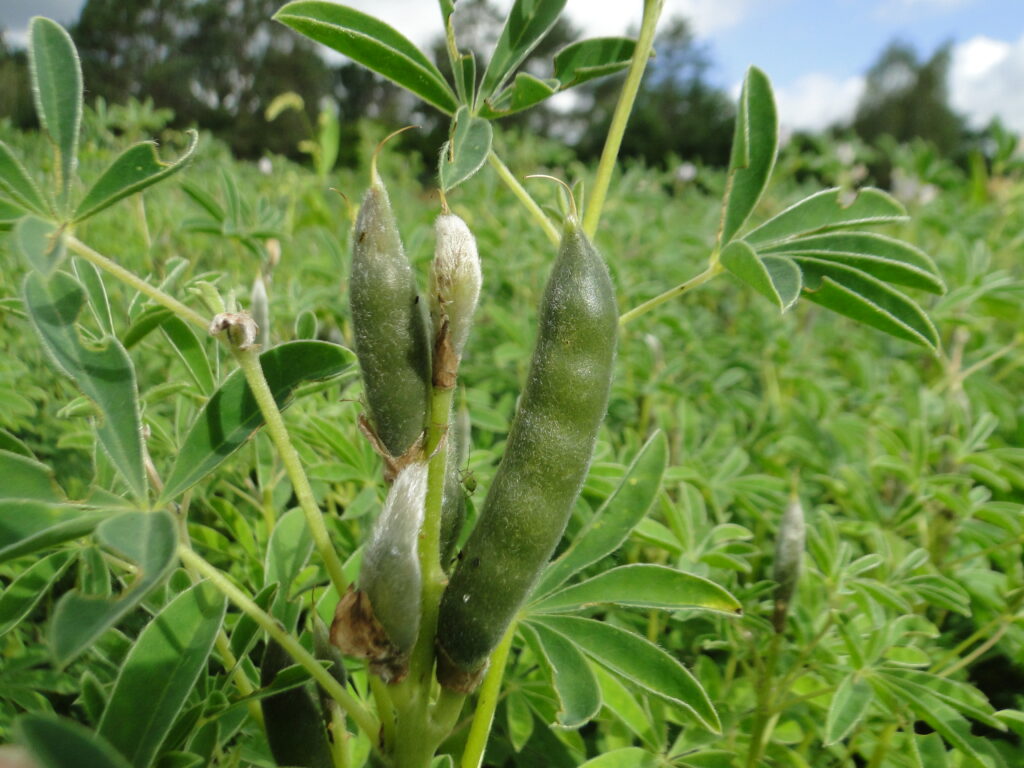 Pods of white lupin grown in a field experiment

Farmers were asked whether they plan to stop or already have stopped lupin production. The majority of conventional and organic farmers stated the intention to continue production, 53% and 62% respectively. However, the other farmers which represent a considerable share, planned to stop or already have stopped lupin cultivation. The major reason to stop cultivation was related to the low yield reported by conventional (50%) and organic farmers (30%). This emphasis on low yields can most likely be traced back to very low yields in 2018 (national average of 0.95 t/ha) and 2019 (1.22 t/ha) which were lower than the national yield averages of 1.56 t/ha from 2011-2021. Organic farmers named also weed infestation (30%) and the increase of the lupin weevil (20%) as important reasons. The lack of pesticides was by 14% of conventional farmers mentioned as a reason for stopping lupin production. Missing financial incentives were also named by 14% of conventional farmers (there is no specific support programme for legumes in some German federal states). Individual conventional and organic farmers named a range of other reasons such as a poor availability and high costs of seed, high alkaloid contents, anthracnose, a limited farm area, poor gross margins, damage from wild animals esp. from birds, uneven ripening, pod shattering, and the ban of cultivation in water protection zones. While many farmers from this survey planned or already had stopped growing lupin, other farmers who were not part of the survey sample started to grow the crop (we only asked lupin growing farmers). 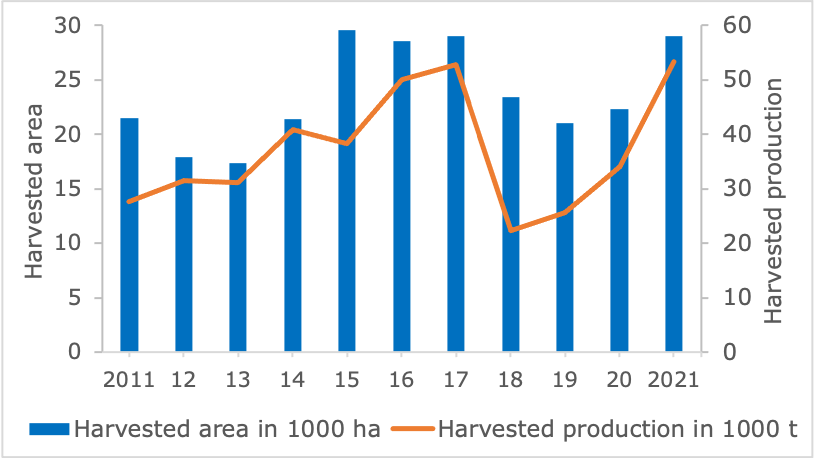 When asked about changes that farmers perceive as necessary to increase lupin cultivation, most conventional farmers ranked the registration of certain pesticides high (72%). Second came financial incentives for protein crops (64%) followed by drought tolerant cultivars (42%) and higher producer prices (41%). Easier distribution channels and disease tolerant cultivars were seen as highly relevant by 22% and 18% of the respondents, respectively and only a few individual farmers perceived new agronomic cultivation techniques, improved mechanical weed management and solutions for controlling the lupin weevil as highly necessary.

Organic farmers also perceived disease tolerant cultivars and higher prices (19%) as important conditions for increasing lupin cultivation. Moreover, financial incentives and drought tolerant cultivars were seen as relevant by 16% of the respondents. Similarly to the results from the conventional farmers, few organic farmers stated a high need for new cultivation techniques (13%) and solutions for lupin weevil (6%).

Beyond the farm level, farmers saw the greatest potential for inducing change in plant breeding, with 62% of conventional farmers and 75% of organic farmers. Marketing, processing and research were ranked with a high potential by a relatively similar share of conventional farmers with 42%, 38% and 34%, respectively. For half of the organic farmers research had a high potential for change and only few saw this potential in processing (20%) and even less in marketing (7%).

Figure 2. Proportion (%) of conventional farmers citing different constraints as major and medium problems. Responses were given on a three-point response scale: major problem, medium problem, no problem (n=number of farmers who responded).

The survey results present some key issues that farmers perceive for lupin production. Lupin is cultivated particularly for producing a domestic protein feed and due to its rotational benefits. Problems in lupin cultivation are especially associated with yield, tolerance to drought, and competition with weed which also caused farmers’ decision to stop lupin cultivation. Farmers demand cultivars that can deal better with extreme weather and have a higher tolerance against diseases. Action and progress in breeding is therefore perceived as highly relevant. Further factors named by farmers were economic determinants. Financial incentives are relevant to secure a profitable production and also an increase in producer prices were requested by farmers.

The survey was conducted after two very dry years with low yields for lupin and other crops. In 2020 and especially 2021, lupin production increased again due to an increasing use of domestic grain legumes for feed and food, the farmer`s interest in growing lupin in regions other than the traditional ones, and the availability of new cultivars, especially white lupin. White lupin can achieve higher yields than narrow-leafed lupin on good soils. Since weather conditions were more favourable in recent years, average yields and harvested production increased.

Figure 3. Proportion (%) of organic farmers citing different constraints as major and medium problems. Responses were given on a three-point response scale: major problem, medium problem, no problem (n=number of farmers who responded).

Demonstration Network for Cultivation and Utilisation of Lupin  https://lupinenverein.de/forschungsprojekte/lupinennetzwerk