Leopold Rittler, Olga Bykova
Posted: 30.04.2021
Timely sowing is important for successful soybean production. Timely sowing gives the best combination of cultivar, the length of daylight (latitude and calendar date), and soil temperature and moisture at planting depth. This enables rapid development and growth of young plants before floral induction, providing the foundation of high yields. This practice note is about identifying the optimum sowing date in each situation.

Soybean at the phase of first trifoliolate leaves

Soybean is a warm-season legume. It is similar to sunflower, maize or sorghum in its response to temperature. Soybean seedlings and young plants are particularly vulnerable to cool conditions. Laboratory studies estimate the minimum temperature for soybean to germinate at about 6–8°C. Emerging seedlings are particularly vulnerable to cold. Soil temperatures need to be high enough to support emergence within about two weeks of sowing. Crop emergence takes about 14 days at 10°C and 7–10 days at 12–15°C. Practice shows that conditions for sowing are suitable when the soil temperature at sowing depth reaches 10–12°C. The most rapid emergence occurs at soil temperatures of about 25°C.

Provided that soil and air temperatures are rising as spring progresses, sowing at this point is likely to give sufficiently fast development in the early growth stages combined with a long growing season. This gives plants time to build up biomass, to form nodules, and to branch before flowering is induced. In summary, an early sowing date forms the basis for yield formation, provided that the seedlings emerge within about two weeks and survive any late spring frosts.

Providing a warm weather forecast for the following days, some farmers opt to sow late-maturing cultivars when soils reach 8–9°C to make the best use of the soil water reserves and the longer growing period. This early sowing increases the potential for vegetative growth which gives larger plants with more nodulation and branching before flowering is induced. This results in a higher yield potential.

The benefits of very early sowing are usually limited as the crop grows only slowly at low temperatures. During this time, the emerging seedling and young plant is exposed to risks. Under cool conditions, the risk of soil-born soybean diseases, especially root rots (fusarium, rhizoctonia, etc.), increases. Seeds and seedlings are also more vulnerable to soil pests. Early emerged plants are more at risk to frost injury. Uneven emergence due to prolonged plant emergence can leave the crop more vulnerable to weeds.

Late spring frosts occur regularly in many parts of Europe and can impact on soybean at the early stages during germination and emergence. The risk of damage is low before emergence and at cotyledon stage and increases when the first pair of true leaves is unfolded. Experiences from Central Europe show, that several hours below -3°C can cause significant damage. The growing point of young plants beyond the cotyledon stage is vulnerable. A frost damaged plant can survive and develop new branches from auxiliary buds. Frost damage to both the growing point and cotyledons usually cause plant death. The negative impact of frost depends not only on air temperature, but also on sowing depth, soil type, its temperature and humidity. Dry soils lose heat faster, but moist soils heat up slowly.

The risk of frost damage is greater in hollows and low-lying areas or where soybean emerges from heavy residues that decrease transfer of heat from the soil. Knowledge of frost incidences from weather records for each growing area combined with weather forecasts helps in managing this risk.

Controlled environment experiments as well as experiences from practice have shown that low soil temperatures (below 10°C) at the time of emergence delay nodule formation and the onset of biological nitrogen fixation. This causes early nitrogen deficiency leading to decreased yield and protein content.

Soybean can be also sown a few weeks after the soil temperature has reached 10°C. As temperatures increase beyond 10°C, the development of the young plant is accelerated and an early closing of the canopy is possible. This is particularly beneficial for suppressing the development of weeds and provides soybean a competitive advantage. Late sowing dates are useful for fields with a high weed infestation or for organic soybean cultivation where herbicide use is not permitted.

Soybean can usually compensate well for sowing delayed during May. Yield losses are more likely when delayed sowing is followed by high temperatures and low soil moisture levels or when the crop is unable to ripen.

The Bavarian State Research Center for Agriculture (LfL, Germany) examined the effect of sowing dates on field emergence over three years. Table 1 shows the effect of soil temperatures at and after sowing on crop emergence. Early sowing is associated with low soil temperatures and the longest germination period resulting in 74% of field emergence. The highest yields were obtained after soybean sowing at the middle of April, when the soil temperature at sowing date was at average 10.5°C and increased to 12.3°C during the frst 14 days (Table 1). Very late planting caused an increased moisture content of soybean seeds at harvesting date and consequently higher drying costs (Table 2).

Sowing usually starts in the second half of April in warm parts of Central Europe (Austria or Germany). Sowing in regions characterised by mild winters and warm springs, e.g. in Croatia, Hungary or Serbia may start 1–2 weeks earlier, while cooler regions such as western Ukraine or Poland start 1–2 weeks later. The latest economically viable planting date for soybean in central Europe is usually in early June due to weather conditions in autumn limiting the harvesting of late maturing crops. Producers in regions characterised by a warm and sunny weather in September and October, e.g., southern France, Italy, Croatia, Hungary or Serbia can sow soybean as a second crop even as late as early July, provided there is irrigation. 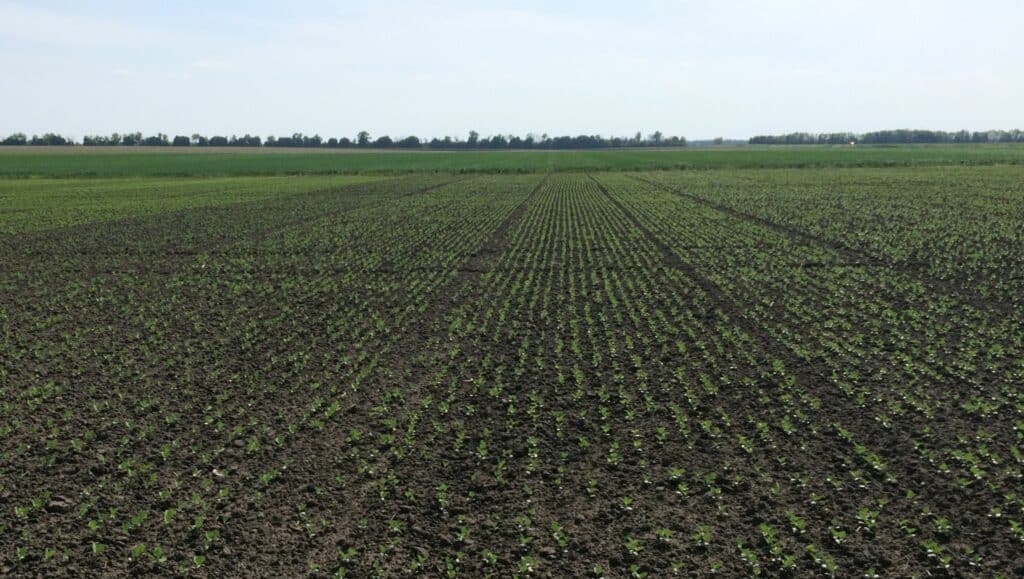 Soybean in the stage of first trifoliolate leaves

Barker, B., 2017. The best planting dates and soil temperatures for seeding soybeans. www.topcropmanager.com/finding-the-sweet-spot-for-seeding-soybeans-20776/